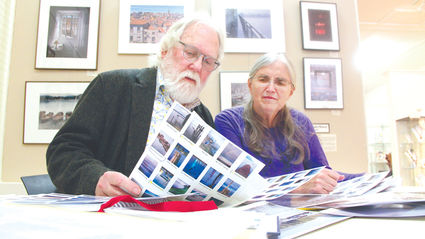 I don't usually stick my neck out and do reviews, but this time I will. I quite like The Tidewater Reach: Field Guide to the Lower Columbia River in Poems and Pictures, a collaboration between Robert Michael Pyle, poet, and Judy VanderMaten, photographer, both of Wahkiakum County.

The color edition is even lovelier, if only to appreciate that VanderMaten's work isn't just about form, but about hue.

VanderMaten moved to the area in 1987, and has long been taking pictures of the natural world, including the Columbia River.

"I like the natural environment a lot," VanderMaten said. "I used to work a long time ago in an outdoor program. I think that's what got me into it. And the need to protect it."

She'd see possible photographs all the time, coming across the bridge or looking down the river.

"I was working in Longview for 23 years, driving up and down SR 4. Sometimes I would kick myself, because I would see something and couldn't stop because I had to get to work," she said.

She"ll never forget the time she saw a tree near Longview that had fallen down over the water, and was partially broken. There was fog behind it, and somehow, the opening on the water created a tunnel effect, and the water was clear and smooth.

"I wanted that shot," VanderMaten said. "I never got that chance again. Every time I went down that road, I'd look for that tree, and one day it was gone. That's just part of photography and why you should have your camera with you all the time."

According to Pyle, this is the first book that Columbia River Reader has ever published.

It all began with his interview in their paper.

Pyle was asked for his five favorite Columbia River books.

"On a whim, I said, I want to list a sixth book, which is my favorite of all, but it's not yet published. It's going to be a collaboration between my favorite photographer and me, so if any publishers are listening out there, give me a call," Pyle said.

"It's a great satisfaction to finally do this book with Judy," he said. "We've been talking bout it, it must be close to 20 years. I think we were at some event at the Broadway Gallery. Judy just put the question to me, would you ever consider collaborating on a book with a photographer?"

"What I do in my writing, particularly in my non fiction and poetry is to create page pictures," Pyle said. "My writing is very pictorial, very descriptive, and that is what I do. I just haven't seen the need."

"But, I was already falling in love with Judy's photographs and had started collecting them," he continued. "I dearly love them. She's really my favorite photographer. As my infatuation with her work grew, I kind of came back to it and said, you know that suggestion you made? That might not be a bad idea."

While Judy already had years of work available for the project, Pyle took some time to focus solely on writing poetry about the Columbia River.

"It was a wonderful time for me, a rapid outpouring," Pyle said. "I was going to give myself a year's sabbatical to write this book. I made many little trips up and down the river, and I'd go to this pub or that pub, and sit and write, or this tree or picnic table, or this fish restaurant, or that dock, or this driftwood, or rock or the ferry, this bridge, whatever, and let my whimsy take me. And that's how poetry should go. Poetry should begin with whimsy. I don't mean necessarily that they are funny. Some kind of a whim. Some kind of romantic notion, or obsession, or fixation, or idea. Some concept that should grab you. Something should grab you and you should go from there, and not know where you're going, it's essential in a poem not to know where it's going to end up, not to know where it's going to take you."

Copies of their book can be purchased at the River Life Interpretive Center in Skamokawa, Tsuga Gallery and The Wahkiakum County Eagle in Cathlamet, or from the Columbia River Reader website.