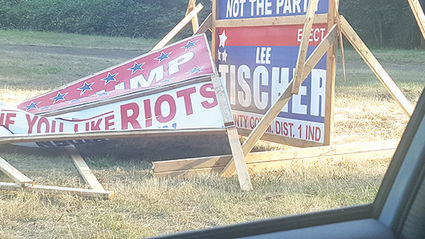 August 30 - 12:12 p.m. A Puget Island resident reported a burglary after finding papers all over the floor. 4:37 p.m. The Cathlamet ambulance aided an ailing Rosedale resident complaining of a high temperature, weakness, and muscle cramps. 8:37 p.m. A motorist with non-functioning trailer lights was escorted by a deputy to the marina.

August 31 - 1:09 a.m. The Cathlamet ambulance aided a Cathlamet resident who had fallen. 2:47 a.m. Deputies responded to a domestic disturbance at an Elochoman Valley home. 8:38 a.m. An individual was taken into custody after an assault was reported during a domestic disturbance at a Rosburg home. 9:27 a.m. A Rosedale resident reported that a neighbor's dog was roaming free and had come onto his property. 10:24 a.m. A caller reported that an alarm had been activated at a Cathlamet home. The caller had knocked at the door, but there was no response. 1:17 p.m. A caller reported lots of aggressive drivers heading west on SR 4. 3:51 p.m. A caller found a wallet in the road near the ferry landing on Puget Island. The owner was notified. 5:56 p.m. A deputy and the Cathlamet ambulance responded to a Cathlamet home to transport an individual who was having psychotic hallucinations to the hospital.

September 1 - 1:43 a.m. A parent reported that a Rosedale youth had run away after a domestic disturbance. Deputies attempted to contact the youth who may have been trying to hitchhike to the Vancouver area. 7:39 a.m. An Elochoman Valley resident reported that a family member had stolen a vehicle. The owner of the vehicle refused to sign a stolen vehicle form, and it became a civil matter. 11:24 a.m. A political sign near County Line Park was vandalized. 1:20 p.m. A calf was found dead in the Elochoman Valley area; one of its ears was missing and half of its skin was gone. It appeared to be a clean cut, not likely done by animals, according to the caller. 4:41 p.m. A Cape Horn resident reported that a neighbor was putting pesticides in the river because he had an algae and green moss issue. The Washington Department of Fish and Wildlife was notified. They said they would notify the Department of Ecology. 7:46 p.m. A caller requested assistance after getting locked out of a vehicle in Cathlamet.

September 2 - 9:19 a.m. A caller reported that someone had taken out a business loan in his name.10:24 a.m. The Cathlamet ambulance transported a clinic patient complaining of chest pain and shortness of breath to the hospital. 11:17 a.m. Child abuse was reported at a Rosedale home. 12:27 p.m. The county road department was notified that a tree was down and blocking Altoona-Pillar Rock Road. 1:27 p.m. A 911 call was dropped. 3:13 p.m. A Cathlamet resident reported that he was being harassed. 3:52 p.m. The Cathlamet ambulance aided a resident on Greenwood Road after a medical alarm was activated. 4:28 p.m. A deputy and the Cathlamet ambulance aided a Rosedale resident with respiratory issues. 4:32 p.m. Clatsop County was notified after a dropped 911 call came in from their area.

September 3 - 12:11 a.m. An Elochoman Valley resident complained about a neighbor's barking dog. A deputy responded and found several dogs in a kennel. They barked upon his approach, he said, but stopped after his arrival. 2:53 a.m. A caller reported seeing a bright light moving up and down an Oregon hillside east of the Wauna Mill. Clatsop County was advised. 4:18 a.m. The Grays River Fire Department responded after a Grays River resident reported that a meter box was glowing and crackling. The PUD was notified. 7:56 a.m. A Puget Island resident complained that a contractor was trespassing. 9:12 a.m. Human Services requested an agency assist from the sheriff's department while they visited an Elochoman Valley home. 10 a.m. The Cathlamet ambulance aided a Puget Island resident with high blood pressure. 10:24 a.m. The Department of Health requested assistance from the sheriff's department while visiting a home on East Valley Road. 11:17 a.m. A panic alarm was activated at an office in the courthouse. It was accidentally pushed by someone who was cleaning. 11:56 a.m. An alarm was activated at a Cathlamet address. 12:59 p.m. A caller reported that a man was trespassing and littering on her property in the Flandersville area. 1:37 p.m. A caller overheard two people talking about operating a phone scam. 3:26 p.m. A motion alarm was activated in a Grays River shop. 4:38 p.m. A caller reported a possible drunk person on Columbia Street. 6:19 p.m. A caller reported a truck traveling at high speeds on a Deep River road.

September 4 - 9:53 a.m. An individual reported losing several hundred dollars in cash. 12:30 p.m. A caller reported that his vehicle had been struck by a car in the courthouse parking lot. The other car took off, the caller said. 1:35 p.m. The Cathlamet ambulance aided an individual at the marina with respiratory issues. 2:09 p.m. A person was reported to be begging for money in a Cathlamet parking lot. The owner asked to have her trespassed. 3:35 p.m. A person who had been begging for money in a Cathlamet parking lot was seen with her pants down, flashing people while standing next to a car parked in Cathlamet with the hood up. 4:07 p.m. A caller was concerned about the safety of a homeless woman with dogs seen walking along SR 4 near County Line Park.

September 5 - 7:42 a.m. An individual who had been trespassed returned to a Cathlamet store. 12:14 p.m. Deputies, the Cathlamet ambulance, and the Skamokawa Fire Department responded to a one vehicle accident. Injuries were reported. 2:19 p.m. Deputies, state patrol, and the District 4 Fire Department responded to a two vehicle accident on SR 4 in the Rosedale area that was blocking the westbound lane. 3:12 p.m. Deputies made contact with an individual who had been seen walking in the Skamokawa area. She said she was headed to Long Beach, and continued to head west. 8:03 p.m. A caller complained about a really loud jet boat on the Columbia River. 11:39 p.m. A Cathlamet resident was concerned that neighbors were going to break into her car or walk into her apartment because the door didn't lock. She said her neighbors were high. Deputies spoke with several nearby residents. They reported that no one had heard a disturbance or had seen a woman with a gun. A deputy called the complainant back and she said she didn't want to deal with the sheriff's department any longer.