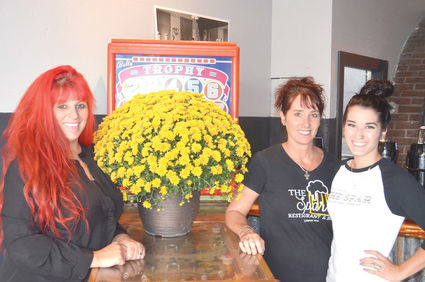 The Spar, a new bar/restaurant on Main Street in Cathlamet, is a first for owner Stephanie Vossen, center, but it is a well traveled path for Manager Jodie Kleinhans, left. Natalie Vossen, right, is a server and Stephanie's daughter.

The doors recently opened at The Spar, a new bar/restaurant on Main Street in Cathlamet for the over 21 crowd.

For owner Stephanie Vossen, it's a first venture in the hospitality industry, but manager Jodie Kleinhans is no stranger to the trade, having opened nine bars and one night club in her career.

Vossen, who worked for an attorney for 20 years before opening her own bookkeeping business, started down this path when she began buying rental properties. She and her father decided to open a gym in her hometown of Kalama, which is still going. Two years ago, she opened the Kalama Vintage Warehouse across the street.

"That's flourishing," Vossen said. "I have two great tenants on either side, Twisted Grapevine and The Gem. Once those were set up and running, I started poking around to see what was out there."

That's how she came across the burnt brick building, which had sat vacant for some time in downtown Cathlamet.

She came to Cathlamet a few times with her grandson. They would walk up and down the street, talking to other shop owners, and stopping at the Wahkiakum Chamber of Commerce to chat.

"I tried to figure out what was going on here before I jumped in," Vossen said. "It felt a lot like Kalama where I grew up. It felt really comfortable. Looking at the building and what it was going to take and I just thought, yep, I can do this. It's a good fit for me."

Initially she planned to do another vintage warehouse. She was renovating the apartments upstairs when she learned that Skamokawa resident Jodie Kleinhans had a large Christmas display available.

"I thought it would be a fun thing for the community during Christmas time," Vossen said. "I thought I'd hang some paper and we'd put in her display and offer photos with Santa so people would know I was here and wanted to do something good for the community."

Unfortunately, the display was 18 feet high and the ceiling in her new property was not.

That was out, but Kleinhans who is as much a risk taker as Vossen, listened to her new friend's plans to open another vintage warehouse. She boldly suggested that it might not be a good fit.

"I said, If you ever want to turn it into a restaurant and a bar, let me know. I've owned nine of them and a nightclub and I enjoy it, and it's something I do well at," Kleinhans said.

"People seem to be embracing it," Kleinhans said. "I think we needed a nice restaurant. I don't think you'll find another place within 50 to 70 miles like this."

Everything is made fresh, and they want people to know they don't own a microwave. They have specials, like $0.83 burgers on Tuesdays, $2 tacos and margaritas on Thursdays, and Prime Rib on Fridays. The Spar is hoping to add delivery Wednesdays through Saturdays all the way from Deep River to Mill Creek and everywhere in between.

"We're trying to do a step above," Kleinhans said. "Everything is made in house, per order. Affordable, quality, consistency, good tasting. That's what we're trying to do."

At the moment, minors aren't allowed, but after getting some feedback, Vossen and Kleinhans are working to change that, at least for some hours during the day.

"We've had a great reception," Vossen said. "People are happy we are here. Our food is great, we just need to work on timelines and processes, but that will come."

"Our servers are brand new and getting better at it," Kleinhans echoed. "We're just asking for patience."

The bar/restuarant is 21 and over. For a menu and more information, look for their Facebook page, go to their website, http://thesparcathlamet.com/ or call 360-849-8168.