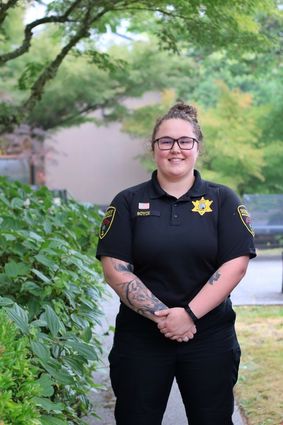 Samantha Boyce, a corrections officer/dispatcher for Wahkiakum County Sheriff's Office, has been named the 2020 Western States Detention Officer of the Year by Jail Con, a conference held annually for corrections personnel.

Only two officers are awarded this distinction each year, one for the western states, the other for the eastern portion of the country.

Boyce was nominated by one of her co-workers for the award and was selected from thousands of other nominees.

"Sam has been a diligent, committed corrections officer from the day she was hired," Sheriff Mark Howie said. "She keeps calm under stressful situations and consistently assists others in a helpful, professional manner, whether in a 911 emergency or at the Sheriff's Office window. She is willing to help her co-workers at the drop of a hat. The Sheriff's Office and Wahkiakum County are fortunate to have such a public servant."

"Sam continuously strives for and maintains a high standard," Chief Joannie Kuhlmeyer said. "I appreciate her hard work and dedication to protecting our fellow officers and community."

"She also excels in her ability to hold her composure in stressful situations as well as communicate to others," one of Boyce's peers said, according to an email from Howie. "After a nervous applicant submitted papers for the corrections/dispatch job, Sam reached out with offers to help. I have now been working in the jail for a year and a half and she has never wavered in her efforts to help myself, our co-workers, and our department as a whole become the best we possibly can."

Samantha's mom and dad, Tony and Anna Boyce, were instrumental in her decision to go into law enforcement.

"They said they could see me as a police officer," Boyce said. "I've always been interested in law enforcement because of what they do. I was always thankful. I was a good kid and athletic, and thought it would be a good fit."

Corrections officers receive training at the academy, but education is ongoing, whether that's in a classroom or on the job. Much of their work requires respect for the inmate while retaining a position of authority.

"I like helping them, because a lot of people that come to jail have never experienced respect," Boyce said. "I am happy to be that positive influence on them, that positive CO that they've met. I love rehabilitating people, and seeing that change."

As for the award?

"I'm proud to make the county proud," she said. "I hope that I can continue doing so."

Boyce graduated from Wahkiakum High School in 2015, and earned an Associates of Arts degree from Lower Columbia College in 2017. She joined the sheriff's office in May of 2018.