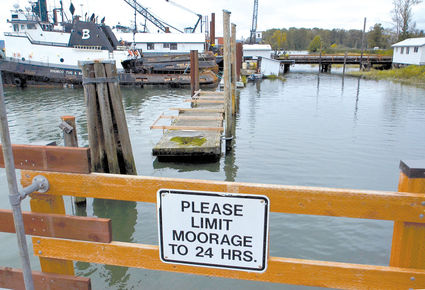 The gangway and a defective float are gone as repairs proceed on Cathlamet's Broadway dock.

On Monday, the Cathlamet Town Council unanimously passed a motion to enter into a contract with Wahkiakum County to reactivate the town's municipal court after approximately 10 years of inactivity.

In addition, Public Works Superintendent David McNally updated the council about the town dock which is no longer accessible because of a temporarily removed gangway; he also reported that the sewer plant's ditch mixer has been damaged and solutions are being discussed; he is also waiting for quotes from labs which would test the town's sewer system for COVID-19 with financial assistance from the county.

Fire Chief Vernon Barton updated the council on the status of volunteers, noting that a few more people have joined in the last couple of months; the department has returned to "as normal of a drill" as they can while maintaining social distancing.

A series of ordinances were voted on, including a $250 increase of the mayor's salary which, after a passing vote, will go into effect in 2022; they also passed motions to repeal outdated liquor sales and civil emergency ordinances which would take effect after an additional vote at a future meeting. The council passed a vote to amend Town Hall office hours to be open Monday through Thursday 8:30 a.m. to 12:30 p.m. and 1:00 p.m. to 4:30 p.m. The office would be closed on Friday, but phones will still be answered.

After nearly 10 years without a municipal court, the town will enter into contract with the county through 2021 to establish enforceable municipal codes.

"It's hard to have enforcement without a court," said Town Attorney Fred Johnson.

The major point of discussion around the court was the costs. The town would incur costs at a rate of $57.60 per infraction, $100.08 per criminal case filed; there will be an initial start up fee of $1,316.86; there will also be court and defense costs.

Johnson assured the council that court and defense costs and fees would likely not exceed $1,000 during the contract year since he anticipates zero jury trials and no need for attorneys for infractions.

"I think it's essential to get our municipal code enforced," said Council Member David Olson.

Council Member Bill Wainwright expressed concern about the indemnification clause which he felt placed a potential burden on the town if someone was injured while in custody. Currently, the contract states that the county, who would enforce municipal codes, is held harmless from any such "negligent acts or omissions."

"If Joe Blow comes in," Wainwright illustrated, "and says he was slammed and sues the town for $300,000 and we are trying to get him in there for a $150 fine...I wonder if the reason we dropped our court 10 years ago was because of liability and cost of indemnification."

Johnson responded by stating that the risk of being sued for any negligence is very low because courts have judicial immunity. He added that the contract at hand is strictly about the court's functioning and not related to holding someone in jail.

On a related note, the town passed a motion to amend the current law enforcement contract with the county which would put the financial burden of jail costs incurred from enforcing municipal codes on the town.

Johnson assured the council of the high rarity of the situation.

"If I filed a criminal case that would get someone in jail, then we would have to pay these costs which I'm not anticipating will happen."

Town prosecution would be a last resort.