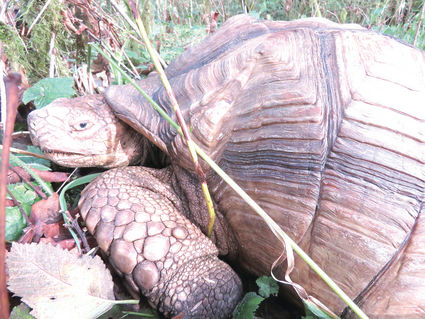 "I had an interesting afternoon yesterday," Skamokawa resident Andrew Emlen wrote on Facebook recently. "I went on a long ramble through the woods above our farm, gathering chanterelles and chicken of the woods and taking photos. I returned via the ridge on the back side of our farm, bushwhacked down to the creek, and found a large tortoise shell."

"Was it alive?" he wondered.

"I lifted the edge of the shell, and his head came out and looked at me," Emlen continued. "It's hard to convey just how unlikely a time and place this was for a tortoise. I bushwhacked to a fallen alder where I could cross the rain-swollen creek (seven inches of rain over the last four days) and walked home."

Emlen posted a photo of the curious and incongruous creature on a Facebook page for Cathlamet Area News and asked if anyone had lost a pet tortoise before enlisting his son, Connor, and Connor's big drybag backpack, a gift from a friend, for the rescue.

"We crossed the log again and relocated the tortoise," Emlen continued in his post. "It took the two of us to slip him backwards into the pack, with his head and one leg sticking out the top. It seemed a little sketchy to cross a slippery log over the creek with a heavy, softly moaning tortoise on my back, but we sure weren't going to bushwhack back over the ridge. I traded the pack back to Connor once we reached my trail. "

"When we got home Connor stepped on the scales before we let the tortoise out - 63 pounds!" Emlen exclaimed.

There were already about 15 messages waiting for Emlen on Cathlamet Area news. Most of them directed him to call Jae Stewart, one of Emlen's neighbors, "down in the valley."

Stewart summers in Skamokawa and spends the rest of the year in Topock, Arizona. She had been inconsolable when Ike, one of her African sulcata tortoises, decided to go on "walkabout," as Emlen described it.

Stewart was certain she would never see Ike again, and about a week ago, returned to Arizona, minus one much loved fellow traveler.

She wasted no time after hearing from Emlen and did the 1,200 mile return trip to the Northwest to greet her old friend.

Stewart has three cats and five tortoises, three of which, Ike, Tina, and Daisy, are quite large. She got her first desert tortoise through Craigslist. Jojo is much smaller than his three cousins, and will never likely get to be much more than six pounds.

That got me hooked, Stewart said.

She returned to Craigslist and learned about a Tortoise Rescue in Arizona.

Stewart contacted the rescue, and jumped through every hoop they gave her.

Ike, who was 10, had been surrendered by his owner when he was being relocated to the Midwest, a poor habitat for the tortoise. It was seven years ago that he found a new home with Stewart.

A few months later, the rescue called again, wondering if she might take another Aftrican sulcata tortoise that had been found near death, abandoned in a storage unit without food and water.

Daisy, the third large tortoise that Stewart cares for, had been confiscated twice from her owner.

"Each one of them has their own personality," Stewart said. "Ike is an extrovert. I can be working in the yard, and if he hears me talking to a neighbor, he knows if he comes over, he will get a treat."

He'll stand there and wait and watch, much like a cat.

"His eyesight is crap," Stewart laughed, "but his hearing is pretty keen."

Ike will eat out of her hand, and her grandkids like to feed him green beans.

The pets travel with Stewart to Skamokawa every year. This time, Ike took advantage of a weakness in his enclosure in mid-August to become African sulcata tortoise explorer.

"I cried so many tears," Stewart said, after finding he was gone. "I knew there was not a chance that I would see him again in this world."

She looked every day. Neighbors helped. She even put an ad in the paper, just in case someone came upon him.

And then, two months later, a call came. 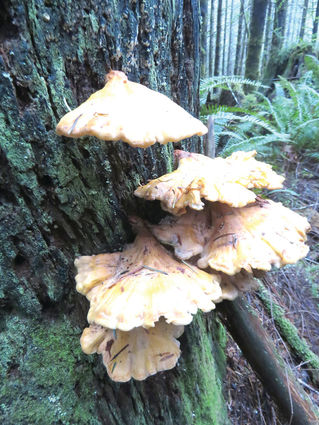 "I couldn't believe it," Stewart said. "It was like a miracle. I can't believe how or where Andrew found him. And he did exactly what he was supposed to do. He took Ike to his house to get him warmed up."

She estimates that Ike must have traveled three or four miles to get from her place to where Emlen found him but figures its unlikely that he traveled a straight path to get there. And she's really grateful Emlen found Ike when he did, with all the rain. Tortoises don't swim, she said.

It took a bit of doing, but after reuniting with Ike, Stewart finally located a veterinarian who had worked with reptiles in Vancouver.

Ike has some inflammation inside his nostrils, but otherwise appears to be fine. And now that he's back in Arizona with Tina and Daisy, he's even better.

"He was so happy to see the girls," Stewart said. "He's eating well, and sprawled in the sand. He's happy to be home."