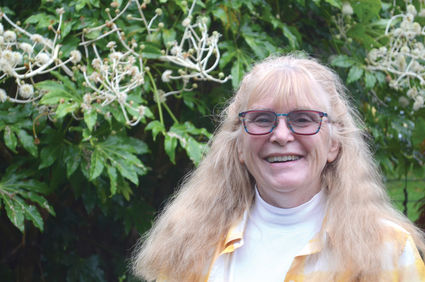 During Joyce Wilson's nearly four decades working at Wahkiakum School District, she became "Mom" to a lot of students, and so her own kids, Todd and Rondee, took to calling her Joyce.

When the two children were young and Joyce and her late husband Dan were relatively new to Cathlamet, Superintendent/Principal John Thomas approached her about getting on the substitute list at the school. He knew she was considering returning to college to finish a degree in engineering, which meant a daily commute to Portland back in those days. He thought she might need a little extra money to pay for gas.

A few days later, Wilson went to the school to apply.

Thomas was way ahead of her. She hadn't even looked at the paperwork when he told her that she would start on Wednesday.

Still a little uncertain, Wilson went home and talked to Dan. The pair had concerns that she might come home from Portland to find their two young children waiting on the steps.

Wilson started at the grade school, working as an aide. She stood outside at recess, and in the resource room, and worked in school suspension, where it was soon discovered that she had some artistic ability.

"Mrs. Wilson, Mrs. Wilson, to the ISS room," she would hear over the loud speaker. It made her cringe, and it also was a signal to coaches, who would quickly send posterboard down to the room, so she could make signs.

Wilson eventually ended up working in the library at the grade school.

"It was a dream job, because I loved to read, and did find I liked kids," she laughed.

They liked her too.

If they misbehaved, she didn't send them to the office. Instead, she'd tell them to "drop and give me ten."

When she turned 50, a former teacher and football coach, Andy Wolf provided black armbands for the entire school to wear.

And she started coaching volleyball, which she continued to do for 26 years.

Wilson had played basketball and softball in after school athletic programs and college but she was new to volleyball. She learned it from the ground up, which she also expected from her athletes.

"I wanted the kids to learn the basics," Wilson said. "I developed a program...so the girls would learn the best technique possible. Coaching, it's a whole different way of relating to kids. I really liked coaching. Some of my best memories are things I did with my teams."

She's grateful to the parents for "loaning" her the girls.

"You develop a friendship and the kids feel good enough to come to your home," Wilson said. "Whatever they need, you're there to help and nurture them along the way."

Wilson laughed at one memory in particular involving a team's visit to her home.

"The team had earned hot chocolate and hot fudge sundaes," Wilson said. "They told me they were going to go out tee-peeing. I kept saying no, no, no."

Unbeknownst to Wilson, the team stole all the toilet paper from her house, and tee-peed another coach's car, which had been parked downtown.

"All the girls," Wilson said. "I'm talking honor students. They are tee-peeing Ed Bates's car when the cops drive by. The girls start running every which way. Some of the girls, straight A students, I'm not saying any names."

Two of the girls hid in the ditch between the post office and the old Mickey's Place. They ran up Greenwood Hill to the Wilson's home, which wasn't locked. The Wilsons had already gone to bed, but it didn't stop those two girls, who came right into the house and right into the Wilson's bedroom and jumped on their bed, yelling, "the cops have the girls, the cops have the girls!"

Wilson thought they were lying and told them so.

"I wouldn't have hauled balls up your hill in flip flops if the cops weren't there," one of the girls told her.

Wilson went to the sheriff's office.

It turned out the volleyball team hadn't been drinking her cocoa. They'd been into her coffee, and they were wired.

Naturally, they were all released, Wilson said. They hadn't done anything bad.

The next morning, the Wilsons step outside to find their entire house had been tee-peed. So she made the team come back and clean it up, despite their protestations that they hadn't done it.

More than a decade passed before she discovered the truth. It was her own kids, Todd and Rondee, who were responsible for that bit of mischief.

"Dan loved the fact that I worked at the school," Wilson said, "he loved being in contact with all the kids. I still have wonderful relationships with so many of the kids, with most of my volleyball players, and good friendships with different coaches and teachers.

"I think that when you work in a place and you're happy and you have great friends, it makes the years go by quickly."

She also realized that she enjoyed her time in the library for another reason, helping kids who struggled in school. She had more than one student return for a fifth year, sitting next to her, determined to graduate because she believed in them.

"I feel fortunate," Wilson said. "I did it for the pleasure, and the fun working with kids. I think that's how I lasted 38 years. Every time I thought about making a change I had a reason not to."