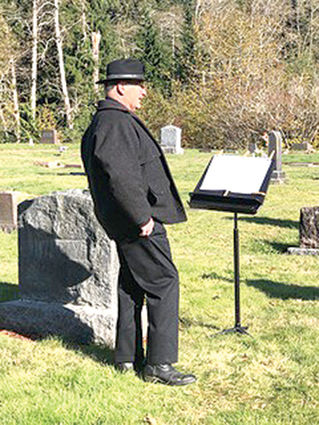 The local Finnish American Folk Festival group from Naselle presented an event on Oct. 31 called the "Talking Tombstones"! This event was met with rave reviews by the presenters and the 95 visitors who came in small COVID friendly groups to hear them.

Monologs were shared by each presenter describing the hardships, faith and endurance of each Finnish ancestor buried there. Donations totaling $384 were generously taken in to help benefit the continued maintenance of the Naselle Community Center, which is now owned by FAFF.

Kelsi Nelson, the drama director from the Naselle school, wrote the monologs based on historical facts and information gathered about each ancestor. The actor/presenters were acquired through the community to portray each character.

--Josh Chadwick played the cemetery caretaker. He led visitors around and introduced each character and told some background about each one. "...It is my belief that stories are the greatest gift we possess. They are the center of life's wheel, with each generation, each person branching out like a spoke on their own, but connected, always, by stories..."

--Steve Ullakko played Werner Hill, a veteran who died at war. He vowed to protect others, even if it cost his life. He fought hard in WWI and laid down his life for his friends.

--Darlene Bjornsgard played Emma Holm, a well-known centurion and teacher who was known for her SISU as she continued to teach others even years after her retirement. She lived to be 100, passing down wisdom to all she touched.

--Genice Normand played Selina Nasi, better known as Aiti, who had 11 children and lost four of them, but continued to make 13 loaves of bread each day. She also played Ada Chapman, the farmer's wife, who lost her husband and son on the same day during a river accident. She taught us the meaning of strength, determination and resilience.

--Evelyn Normand played Alice Holm, a well-known subject of the "Our Only Mae Amelia" book. "This story was beautifully written, a love letter, of sorts, to this place and the customs that raised us...family, this valley...finding the balance between freedom and tradition."

--Violet Normand played Ida Talus, the young girl who lost her eyesight, yet played the Kantele (Finnish national instrument) beautifully. She died at nine years of age. "Even a short life is a good life and I have much to be thankful for...I choose to find joy in the life I lived, knowing that I learned precisely what I needed to." 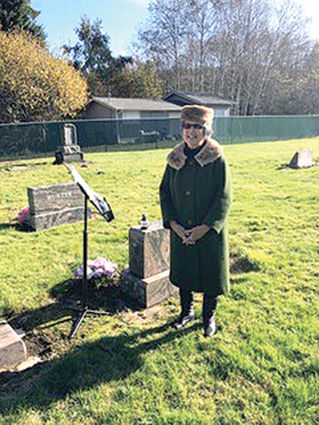 A special tribute was mentioned to the Pakenen family, whose ancestors were the earliest settlers in Naselle.

This event can be watched on the Finn Fest website: http://nasellefinnfest.com, or on Facebook at finnish-american folk festival of Naselle.

The association's next big event will be a Christmas Festival of Lights on Dec. 5 with a light tour around neighborhoods as well as a Christmas wreath (silent auction) and a 'hopeful' soup supper at the Naselle Community Center.