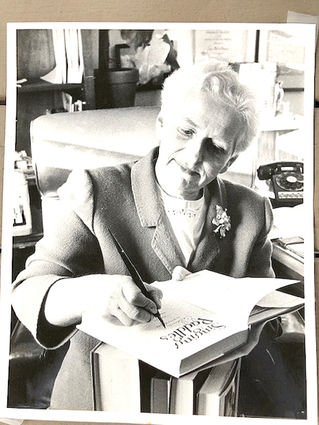 Julia Butler Hansen autographs a copy of "Singing Paddles" for Caroline Kennedy in 1961. A biography of the influential Cathlamet resident who wielded power from coast to coast has just been released. Courtesy photo.

The first major biography of Congresswoman Julia Butler Hansen, the granddaughter of Wahkiakum County pioneers, has been published by Legacy Washington, the oral history program of the Office of the Secretary of State.

Julia Butler Hansen, A trailblazing Washington politician, was written by John C. Hughes, Legacy Washington's chief historian. Hughes was a political reporter for The Aberdeen Daily World in 1967 when Hansen became the most powerful woman in Congress as the first woman to head a House appropriations subcommittee. She controlled the billion-dollar budgets for the Department of the Interior and Related Agencies, including the U.S. Forest Service, the Fish & Wildlife Service, the Bureau of Indian Affairs and the Bureau of Land Management.

"In the 1960s, three Washington politicians were household names: 'Scoop,' 'Maggie' and Julia,' " Hughes writes. "The two U.S. senators-Henry M. Jackson and Warren G. Magnuson-had known Julia since their days together as Young Democrats in the 1930s.

"In the beginning, I always called her 'Mrs. Hansen,' but after a few years she said, 'Call me Julia. Everyone else does!' That was absolutely true in the sprawling 3rd Congressional District." Columnists and editorial writers dubbed her "The Duchess of Cathlamet," "The Sage of Wahkiakum County," "The Little Old Lady in Logging Boots" and "Mrs. Highways."

Julia's suffragist mother, Maude Kimball Butler, was elected Wahkiakum County School superintendent at the age of 23 in 1903. Julia's father was the county sheriff. She grew up believing "girls can do anything," Hughes writes, "even though she was from a town of scarcely 500 people." She always said she "was raised with one fundamental belief-that you should serve your country."

Julia's rapid rise on Capitol Hill after 21 years as a power in the state Legislature came as no surprise to those who had followed her storied political career.

"Overcoming male chauvinism with her competence and charisma," Hughes writes, she was the first woman to serve on the Cathlamet Town Council; the first woman to head the Education and Roads & Bridges committees in the Washington State House of Representatives; the first female chairman of the 11-state Western Interstate Committee on Highway Policy; the first female speaker pro-tempore of the Washington State House, and the second Washington woman elected to Congress. Together with her good friend, Oregon Congresswoman Edith Green, Julia championed the Equal Pay Act of 1963 and was a co-sponsor of the Equal Rights Amendment.

In the twilight of her political career, she became the first woman to head the Washington State Transportation Commission. She was largely responsible for creating its predecessor, the State Highway Commission. She retired from politics in 1975, undefeated in 42 consecutive elections, including primaries.

Julia always listed her profession as "author." She helped celebrate Cathlamet's Centennial in 1946 by writing and directing a play dedicated to the area's pioneers. She reprised it for special occasions over the years, and often wrote "Birnie's Retreat" below her signature when she autographed copies of Singing Paddles, the award-winning children's book she wrote in 1934. Proud to be a historian, she helped secure funds for the first purpose-built Washington State Library. She was also a trustee of the Washington State Historical Society.

The congresswoman's son, David Hansen, a retired Fort Vancouver historian, gave Hughes full access to his mother's journals, which she began keeping at the age of 15 in 1922.

"Off and on for the next 65 years, Julia confided her hopes, dreams, anxieties and fears to her journals," Hughes writes. "They are a remarkably intimate, revealing window on the life of an extraordinary woman."

She died in Cathlamet in 1988 at the age of 80. "No one ever represented her people better than Julia Butler Hansen," said Senator Magnuson.

Saluting her as Washington's "grand lady of politics and transportation," the Legislature and Transportation Commission had voted to rename the historic Puget Island Bridge in her honor. As a freshman legislator in 1939, she played a key role in securing final funding for the span.

The 300-page book, which features nearly a hundred photos, is available for purchase for $20 through the Secretary of State's online book store at: https://www.sos.wa.gov/legacy/