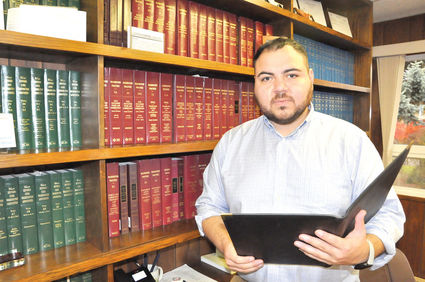 What do music, magic, debating, basketball, and law all have in common? Meet Tom Garvey, Hanigan Law Office's newest associate.

Garvey, 30, transplanted to Washington in 2015 after graduating from Kansas University with the initial interest of visiting his brother and getting to know the local music scene. His knack for research, stemming from a history of competitive debating, eventually led to pursuing Seattle University's legal writing program where he graduated in Spring 2020. Before launching into his legal career, Garvey worked for Boeing Employees Credit Union while studying for the LSAT.

Becoming a lawyer, according to Garvey, can be traced back to a high school football injury during the season opener of his freshmen year. A torn meniscus and two surgeries rendered him unable to participate in any physical activity.

"Advisors told me that the only other option was debate or forensics. So I protested, I didn't want to do it," Garvey explained.

He decided to go the debate route which he quickly learned was just as competitive as any physical sport and a foundation for making lifelong connections. More than that, debate would be the launching pad for his college career, and beyond. After a back-to-back nationals run his junior and senior year, Garvey was offered a scholarship at Wichita State where he attended for two years before transferring to Kansas City College.

"That was the year that my debate partner and I won multiple tournaments. I individually won numerous individual speaking awards as well as a qualification to the National Debate Tournament," Garvey recalls.

By 2014, Garvey was ready to transfer to Kansas University on yet another debate scholarship. As an upperclassmen in a larger program, debate didn't feel as prevalent as other activities including music and, who would guess, basketball.

"Everywhere you go, crimson and blue," Garvey illustrated. "The culture is basketball over everything.The school year doesn't really start until October when our first game is."

Even if debate success didn't come for Garvey during his time at KU, he was sure to find it another way. The school was hosting an equivalent to America's Got Talent and auditioned several students including Garvey, who was rejected.

However, after a participant dropped, the organizers scrambled two days before the competition and offered Garvey a shot. Reluctantly he accepted and in front of 300 people, with little preparation, played an original song on his guitar and took home third place.

"I played a song that I wrote, it was like a blues song and yeah, the judges really liked it," Garvey remembered.

Fast forward to 2017, while working for BECU, Garvey passed his LSAT, earned himself another scholarship, and began law school at Seattle University (SU) which had an attractive legal writing program and opportunities to continue his debating career. He participated in moot court, otherwise described as simulated court or arbitration proceedings.

"I really wanted to do trials and litigation and just something that was like public speaking or performance or persuasion, because that's really what debate was," Garvey explained. "Debate was a ton of research and then using that research to persuade somebody. That's basically what I wanted to get out of law school and something I was able to do."

At SU, Garvey received a Rule 9 license which in the state of Washington grants law students the right to practice law under the supervision of an experienced lawyer. At firms in King, Pierce, and Thurston counties, he learned to go up against veteran lawyers and transfer his competitive nature to the courtroom.

Garvey will be the first to admit that he comes across as shy. However, if you ask him if he knows a magic trick, casually yet unabashedly he'll present a deck of cards to curb your curiosity and sharpen his skill. Be careful though, he might make your legal troubles vanish.