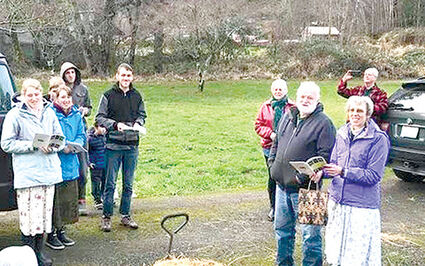 The caroling Zimmerman and Wrasse families.

Christmas traditions vary from place to place, so it didn't seem unusual to not have few or any trick-or-treaters on Halloween or to experience Christmas traditions in the remote area of the Westend. The covid-19 pandemic has had many in fear that a few in high places had the audacity to suggest that Christmas be cancelled. Of course, that never happened and we have had the opportunity to continue with our constitutional right to celebrate. There are so many Christmas traditions that we celebrate without a second thought, and one such tradition is the act of going to people's homes and singing Christmas carols like the Zimmerman and Wrasse families did this past week.

The last time I encountered Christmas carolers was more than 50 years ago when caroling was more common, and carolers dressed in the traditional Victorian attire, so I was a bit surprised to see that this tradition is still alive.

After they sang, my mother gave them hot apple cider. I always wondered why she did that for complete strangers. It had been so long that I completely forgot this time tested tradition. After the Zimmerman and Wrasse families finished singing Christmas songs, my wife gave them a bag of goodies just like it has been done for centuries without knowing why. I began to wonder how it all started and if there were any changes along the way and I was not a bit surprised. Like most myths or legends, they all start with some premise of truth, but which one of the many stories of the origins of singing carols was true? There's no conclusive history behind Christmas caroling. It is unclear where they originated, who wrote them and how they evolved. What we see today is an oral tradition, passed down from generation to generation.

According to author James Cooper's 2000 article "The History of Christmas Carols," he suggests that carols were sung thousands of years ago in Europe as pagan songs celebrating the Winter Solstice. People danced around stone circles taking place on the 22nd. The word carol means dance or a song of praise and joy.

Wassail (pronounced WOSS-ul) is an Old Norse term ves heil, and Old English was hál, meaning "be healthy!" The Middle Ages custom of "wassailing" concerned peasants going to the homes of their feudal lords and getting wassail and food in return for a blessing in the form of a song. This inspired the tradition of going door to door singing Christmas carols. Wassail was a thick, hot spiced beverage that helped keep the traveling well-wishers warm. The drink was just as much of a holiday tradition as eggnog is today with or without alcohol.

Carols commemorating the birth of Jesus Christ were allegedly first written in Latin in the 4th and 5th centuries, but they didn't become connected with Christmas until the 13th century when Saint Francis of Assisi was credited with combining Latin hymns into Christmas services.

Another theory is that carolers went door-to-door because they were not originally allowed to perform in churches. Others say this idea didn't develop until the 16th century, when Anglo-Saxon peasants adapted these pagan customs when they went wassailing, requesting nourishment from their superiors in exchange for singing good tidings.

Caroling today is still deeply rooted in the culture of American holiday traditions. In 2017 according to Pew Research Center about 16% of Americans reported going caroling. This estimate may reflect the nature of change that was more common with Baby Boomers than with Millennials who may only see carolers in Christmas movies. My mother gave cider to carolers out of a tradition that goes back thousands of years and is mostly unrecognizable from its origins without fully knowing why. The tradition of Christmas caroling may morph over the next centuries into some other homogenous tradition that will again be different from today.