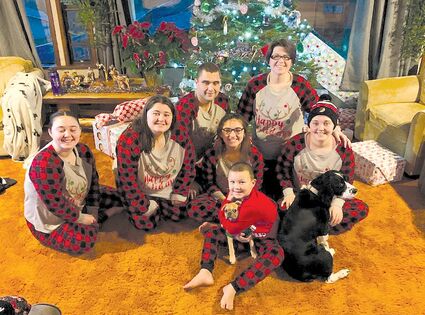 Life can turn on a dime, it's said. I heard this story on a Wednesday morning. Before the day was over, it had taken a surprising and brighter turn, I'm pleased to say.

Let's start at the beginning.

If you've been lucky enough to catch some Wahkiakum Mules girls basketball in the last few years, you know about the Watkins twins, Alexzandria and Kimberlee. The two are juniors this year, 17 years old, and have been on the varsity team since they were in eighth grade.

It's been a hard year for many reasons, and the loss of basketball season hasn't helped.

Everything got a little harder for Alexzandria and the Watkins family this fall.

She started having severe back pains in September, which she described to her mom, Lisa Johnson Watkins, as a pinch that began in front and wrapped around to her back.

Because of family history, Watkins assumed it was Alexzandria's gall bladder. In October, the active teen went in for an ultrasound. Her gall bladder looked fine, but they could see a curious collection of fluid around her heart.

That's when mom asked to have Alexzandria sent to Randall Children's Hospital in Portland to see specialists. Her doctors agreed.

While they waited for a doctor at Randall to respond, Alexzandria's pediatrician said she wanted to run some more tests. Four markers in her bloodwork didn't look right.

"I started doing my own research on reputable sites, and I realized there was one of two things it could be: cancer or an autoimmune disorder," Watkins said. "I knew they knew something was going on, but they couldn't order more tests there. They needed to send her to a specialist."

Meanwhile, the pain got worse.

"I'm talking massive pain," Watkins said. "She was up at two and three o'clock in the morning, pacing the floor, sobbing. My girl doesn't cry. She's really, really tough."

On October 23, Alexzandria called her dad, who was working on a project elsewhere. She was in awful pain again, crying. Watkins, who was at work, told her husband, Justin, to take Alexzandria to the hospital.

The hospital ran a lot of tests, Watkins said, and they eventually moved Alexzandria to another floor at the hospital, so they could keep an eye on her.

On the 25th, Watkins got a phone call. She didn't hear the woman's name. All she heard was the woman's title, and it knocked the wind out of her. Pediatric oncologist.

"I think that might be a parent's worst fear," Watkins said.

They had found nodules on Alexzandria's lungs. A later test showed that her lymph nodes were affected from head to toe, Watkins said.

On October 29, Watkins was headed to work when she received another phone call.

This doctor had preliminary results.

"I regret I have to tell you this, but she definitely has Hodgkin lymphoma," the doctor said to Watkins. "I want you to also to know that Hodgkin Lymphoma is one of the most curable cancers in children. We can attack this quick, hit it hard and fast."

Somewhere along the way, they learned it was Stage 4.

The next morning Lisa and Justin sat down with Alexzandria and the rest of the family and let everyone know what was going on.

A week later, they were at Randall Children's Hospital, meeting with their new doctor and her team.

"The people providing care for Alexzandria are phenomenal," Watkins said.

The two medications that are replaced with the trial medication have been found to have some connection with future infertility and lung issues, Watkins said. It was an easy decision.

They go in to Portland every Monday, and will continue to do so for a six month period. Alexzandria has chemotherapy every other week, and every other time she has chemotherapy, she is given a really strong antibiotic to ward off a parasitical lung infection common in cancer patients. The weeks she doesn't have chemo, she is there for bloodwork.

They learned what was causing the pain. The lymph nodes behind her kidneys were inflamed, putting pressure on her spine and her kidneys.

By Alexzandria's second round of chemo, the pain was gone. The fluid around her heart is also gone.

The first two days after her treatment, she sleeps, Watkins said. Days 3-5, they see her a little bit more. They just make sure she stays hydrated.

There have been other trips to the hospital in Portland. She's had strep throat, a high fever, an abscess, all of which required antibiotics. She had a bad reaction to PICC line, which was placed in her arm, and is used to administer the chemotherapy directly to her heart. It needed to be replaced.

They spend a lot of time on the road these days.

"That poor kid has no natural goodness in her at this point," Watkins laughed. "If it isn't the chemo, it's the antibiotics."

On Thanksgiving morning, while Watkins was out running errands, Alexzandria called and asked if she would brush her hair, a comforting act between mother and child. Before Watkins could get home, she received another phone call. This time her girl was angry.

The family gathered and together they cut her hair. Lisa, Justin, Kimberlee, 17, Kamryn, 15, Reagyn, 11, and Ryder, 7. Lisa's sister Stephanie, and her kids. And Grandpa, Willie Johnson.

"It was heart wrenching," Watkins said.

Both Lisa and Justin work. The two have had to rearrange their schedules so one of them is always home. Thankfully, Alexzandria's treatment is covered by insurance.

Now for one of those life and dime moments.

Last Wednesday, not long after my interview with Watkins, Alexzandria had a PET Scan.

The doctor called as she and her mom made their way home from Portland.

"There is no more evidence of disease," she told them.

There has been much celebration.

"I cried more about that than I did about the actual diagnosis," Watkins said. 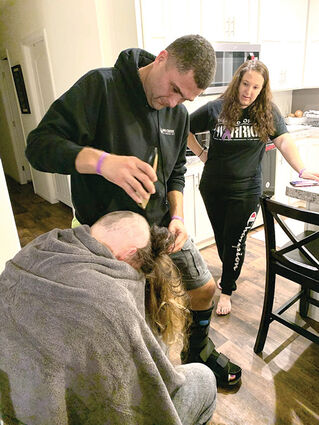 It was an emotional experience for all, as members of Alexzandria Watkins' family took turns cutting her hair, which had started to fall out when she began chemotherapy. She's seen here with her dad, Justin, and her Aunt Stephanie Johnson.

"Does that mean she's cancer free?" Watkins continued. "Not yet. The tumors have all shrunk. But she will have to continue through the end of her treatment plan because there can be solitary cancer cells living, that they want to make sure are dead."

So she will end up finishing her six month treatment plan.

"They don't think there will be any necessary need for radiation," Watkins said happily. "They don't see anything in her lungs, except for scarring, which is normal with Hodgkin lymphoma when it affects your lungs."

While insurance covers treatment, there are other needs. There are several ways to support Alexzandria and her family, including various fundraisers started by friends. An account was set up at Fibre Federal, and you can learn about those things and more by joining the #TeamAlex Facebook group: https://www.facebook.com/groups/1054563065003751.