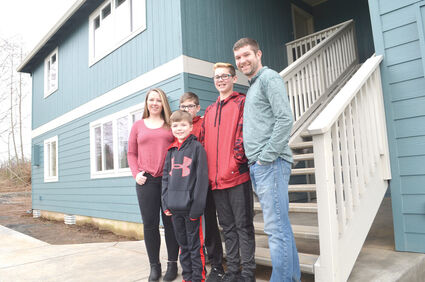 Ryan and Melissa Garrett, and their three boys, Josiah, 12, Nathan, 14, (back, left to right), and Jeremiah, 7,(front), stand in front of their new fourplex on Greenwood Road, which will provide much needed affordable housing not only for them, but for three other families in Cathlamet. Construction will begin on a second fourplex in April.

Rental property wasn't really in Ryan and Melissa Garrett's plans. They had just purchased a home in Wahkiakum County, where they both grew up and went to school and were now raising their kids, with the intention of flipping it.

What they didn't see coming was the torrent of response from people who were looking for a home to rent.

"We hadn't advertised that we had purchased it," Ryan Garrett said, "but for that many people to contact us in need of a rental, it really got us thinking about how big of a need there was."

The pair began to wonder if they could help.

"I'm a Christian," Garrett said, "and God really put it on my heart for this town to have these rentals."

They figured they had two options. They could flip homes three or four more times, and build up some more equity, or they could take a faster route. The family of five was living in a large home that had been purchased with foster care in mind. They'd been doing that too for awhile, but had decided to take a break from it, and begin again when their own children were a little older.

"Our home was much larger than we needed," Garrett said, "but we felt like our community needed this so badly right now."

So they sold their home and the couple, their three kids, and two dogs moved into a 34 foot trailer, which they parked at the Elochoman Slough Marina.

They lived there for more than half a year.

"That's been an experience," Garrett laughed. It's a story, but perhaps one for another day.

"We ended up being blessed with an amazing piece of land on Greenwood Hill," he said. "We were able to buy that with cash and were able to use the land as equity to start the process to build a fourplex."

The Garretts drew up a design of their own, which they took to an architect.

"She redrew them out, much better," Garrett laughed.

They've also been working with the contractor, GLS Quality Homes who, Garrett says, has been amazing.

"They've done a ton of work and were able to get our costs way down," he said.

Each apartment is 958 square feet, with two bedrooms and one bathroom. All appliances and stackable washer and dryer have been provided for each space.

"The apartments turned out nice. I didn't want them to be minimal, but I didn't want high end," Garrett said. "The whole purpose of doing this is to keep people in Cathlamet, and to make them affordable. We've had numerous people tell us we could rent them for much higher than we are. We could, but we're not trying to make money, we're trying to fill a need. So long as our mortgage is covered, we're good."

The family will be moving into one of the apartments soon, and the other three units have already been rented.

A second fourplex is already planned, and they will be breaking ground on that in April. They have two renters lined up for that building, and they have yet to do any advertising.

"We'll get eight solid renters," Garrett said," and feel it out from there. We're not going to turn the 12 acres into a huge development."