On January 27 and 28, Veterans of Foreign Wars Wahkiakum Post 5297 presented certificates and cash awards to winners of the 2020 Patriots Pen and Youth Essay contest at the John C. Thomas Middle School and Julius A. Wendt Elementary School.

Working alongside America's youth and instilling a sense of patriotism has always been a VFW priority. Each year VFW posts hold three essay competitions, the Voice of Democracy for grades 9-12, the Patriots Pen for grades 6-8, and the Youth Essay for grades 3-5. Students write essays based on given patriotic themes and the essays are evaluated by members of the local post and community members. Winners of the essay competition are recognized with certificates and cash awards. First place Youth essay winners compete up to the District 16 level. Patriots Pen and Voice of Democracy winners compete up through District 16 and state levels and to the National level.

Post 5297 Commander Bill Tawater and Post 5297 Essay Program Director Bob Roche presented certificates and cash awards to the winners. Due to COVID-19 School Protocols, some winners were awarded in their classrooms. Sixth and seventh grade winners were presented their awards in the Middle School gym. Some winners are home schooled. 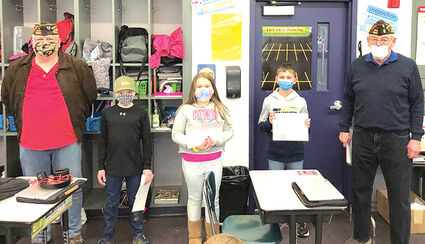 Post 5297 will recognize Teacher of the Year Don Cox. He will be presented with a certificate and a cash award of $400.

Brayden Hilton, seventh grade, won state and will compete at the national level.