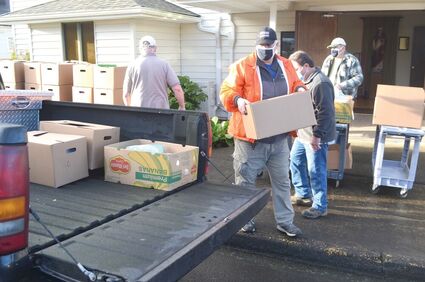 The St. Catherine/St. Vincent de Paul Food Bank was busy last Wednesday as volunteers loaded boxes of staples, produce, and coffee in a drive up service they now provide because of the pandemic. Coordinator Tom Gartski lifted boxes that would be feeding more than one family into the back of one visitor's truck. Also seen are l-r, volunteers Mike Swift, Jim Mendoza, and John Doumit. 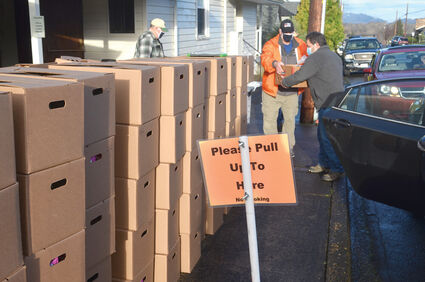 Tom Gartski hands a box of food to Mendoza, who turns and loads the box into the waiting vehicle as part of the food bank's new drive up service. Food bank visitors are no longer able to come in and select the items that they want because of safety concerns during the pandemic.

Volunteers Tom Gartski, Mike Swift, John Doumit, John Doumit, Jr., Fred Johnson, and Jim Mendoza were ready for the host of people who were arriving to pick up coffee, fresh produce and other staples provided by the food bank the church runs in conjunction with St. Vincent de Paul.

"The drive up service is new," Gartski said, "and things are going great."

The food bank served 1,600 pounds of food last week to 52 Wahkiakum families, or 106 individuals, many of whom have been struggling during the pandemic.

On the third Wednesday of the month, the food bank expects to give away 3,000 pounds of food. That's when they include commodities, and the number of families who take advantage of the program increases.