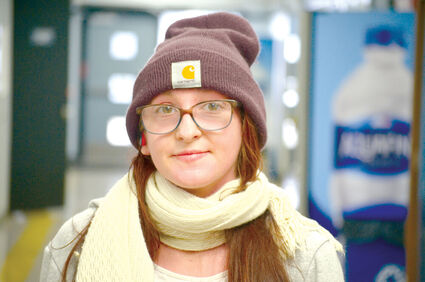 The future is a mystery to this young woman, but she is up for the ride. The only certainty is a plan to take a gap year after she graduates, just to work, and "learn how the world is." After that, she might attend Lower Columbia College and study psychology.

"I'll have to see where the world takes me," Mackenzie said.

Kyle Hurley is her favorite teacher at Wahkiakum High School. The day starts with him in leadership class, where she and her classmates consider careers, hold mock interviews, and prepare for life after school.

"He puts all the students at ease," Mackenzie said. "We've been taking the pandemic very seriously, but it's nice to sit in a classroom and joke around."

Mackenzie loves to read, but it wasn't always that way.

"I fell in love with it in seventh grade after hating it my whole life," she said. "A teacher in Vancouver taught me that reading didn't have to be a chore. I thought books were all boring and non-fiction."

One of her fondest memories at Wa-Ki-Hi was a bus ride to Mass Choir.

"There were only five or six of us in the choir, too many to ride in Suburbans, so we had to take a bus," Mackenzie laughed. "It was basically empty, and we were screaming lyrics to whatever was on the radio. Our teacher, Mrs. Mead, was worried we were going to strain our voices. It was fun."

Mackenzie grew up in Vancouver, but a few years ago, her family decided it was time to get out of Clark County.

"It was getting hectic and I was being bullied a little bit," she said. "I was like, yeah! Let's move!"

Her mom let her pick their home, which sits on three and a half acres shaped like a trapezoid in the Elochoman.

"I like to see the landscape," Mackenzie said. "I like how it's isolated and away from neighbors, because I'm very shy and anti-social. We don't have to deal with people!"

She's explored all of it and once in awhile you might find her outside, reading a book with the family's two goats, handful of chickens, four dogs, six cats, Muscovy and bird.

Mackenzie is the daughter of Maggie Fletcher-Cook.