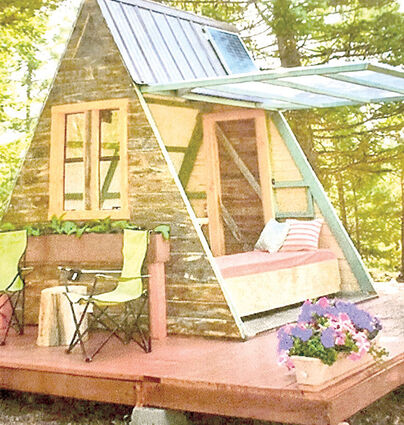 Two A-frame cabins such as this may be erected at the Elochoman Slough Marina this year.

In an effort to improve kayakers' experience coming in and out of the Elochoman Slough Marina, Wahkiakum County Port 1 decided to provide an alternate place for them to enter and exit the water.

The kayak launch has been moved away from the boat launch to the commercial dock, which can be accessed by the rock pit, and which will benefit Columbia River Kayaking, which sometimes guides kayak trips from the marina.

"That will give them their own spot for staging," Commissioner Scott Anderson said. "That's a good deal."

Commissioner Brett Deaton agreed, adding that he'd seen some tense encounters between power boaters and kayakers who were trying to use the boat launch at the same time.

"It's good to separate them," he said.

Commissioners quickly tackled action items, agreeing on a $25 per unit (motorhome/camper) rate for a new large campsite at the end of the jetty and to forgo seasonal rates and hold to a flat RV rate at $35 a night throughout the year.

Lea said that the staff had considered erecting a couple A-frame cabins in the least used dry camp sites along the river. She guessed that the structures were approximately 12'x12', and the port could build them for about $800.

Commissioners liked the idea. Lea will ascertain if a building permit is needed and move forward with the project.

The conversation shifted to replacing the fingers on C dock. Lea said that she was hoping to get permits, and to put the pilings on the inside when they built the frame, as they had done with E dock. She said she had spoken with someone the port had worked with in the past, and he was willing to teach them how to construct the different design.

"No one wants to tie up next to a piling," Lea said.

Commissioners gave their blessing for Lea to apply for a permit.

Maintenance Manager Todd Souvenir said that he had begun to install new lights in the storage units, a project he expected to have completed before the next meeting in March. He also said that some trees around the property had been trimmed, and water lines for the new campsite had been purchased. He gave a quick update on the viewing deck, noting that Wahkiakum County Building Inspector David Hicks had been checking on it regularly, and that all was going well.

There was some final good news for the port. There will be a spring salmon season, Deaton said. The dates had not been determined, but Lea said the port had been taking calls about the season all day.