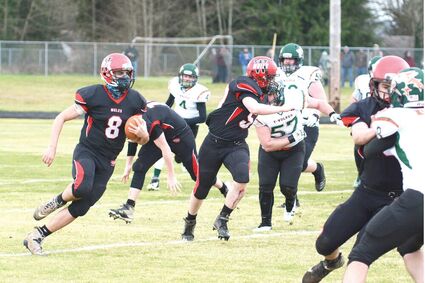 Dominic Curl follows the blockers for a good gain in the Mules' 41-8 over Morton/White Pass on Saturday.

The Wahkiakum Mule football team boosted its record to 2-0 with a 41-8 win over the Morton/White Pass Timberwolves last Saturday.

The Mules head to South Bend High School this Friday for a 7 p.m. game with the Raymond/South Bend Ravens.The Ravens opened their season with a 24-12 over the Ilwaco Fishermen last weekend.

The Mules had little trouble with the Timberwolves. They led 14-0 after one quarter and 35-0 at halftime. They closed out their scoring at 3:09 of the third quarter. 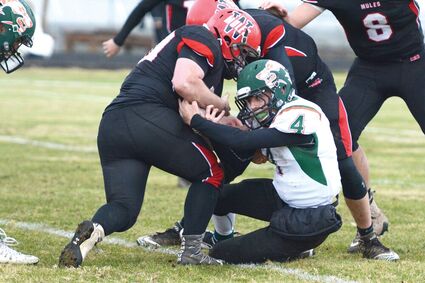 Chance Cothren stripped the ball from a Timberwolf back and ran for a touchdown.

Chance Cothren scored on a 16-yard pass from quarterback Brody Carlson and on runs of five, 40 and seven yards. Wingback Jake Leitz and quarterback Carlson combined for a 30-yard touchdown, and Carlson scored on a four-yard run. Carlson completed 10 of 13 passes for 135 yards; Leitz caught five passes for 90 yards. Elijah Cothren kicked five out of six conversion attempts.

The Mule host the Stevenson Bulldogs on March 5; they head to Ocean Shores March 12 to play the North Beach Hyaks, and they'll host Ilwaco March 19 to close out the abbreviated 2020-21 season. All games are at 7 p.m.