State's only Native American legislator cuts a path in Olympia 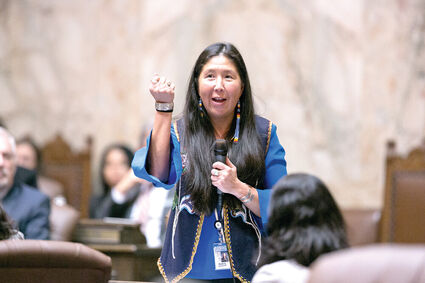 Debra Lekanoff is the only Native American in the Washington State Legislature, and she feels the weight of clearing the way for others to follow.

Debra Lekanoff always makes sure to appreciate her surroundings, whether she's spending time in nature or on the House floor at the Capitol in Olympia, where she has served for the last three years as the Democratic representative of the 40th District in the northwest corner of the state.

"I sit right in the middle of the People's House. I have my Republican colleagues to my left and my Democratic to the right, and watching our two parties work together for the best of Washington State...continues to be one of the highlights," she said of her time in the Legislature.

The only Native American lawmaker in the state, Lekanoff came up against the same kind of hurdles women of color across the country face when they run for public office.

"I ran against five white males," Lekanoff said about her first campaign in 2018. "It was an ugly and racial race. Coming from a predominantly Democratic district, I dealt with more racism than I thought I would ever see. I actually had one [candidate] say, 'You have to choose between being Native and being American. You have to pick one or the other, because you can't pick both.'"

"It was a good learning experience, because I couldn't look at them with judgment," Lekanoff said. "I had to look at them and say, 'They don't understand, so we need to do a better job educating those around us.'"

Lekanoff views that ugly campaign and the fact she's the sole Native American in the Legislature as both an honor and a continuing challenge.

"I always say that I'm clearing a pathway for more women of color and more Native American women to run for office," she said. "I'll leave a couple branches there for them, because it can't be perfect. They've got to clear their own pathway too."

Lekanoff is looking to build deeper familiarity and trust in part by working to improve the way Native Americans are represented.

House Bill 1356 would create a process around the way Native American names or symbols might be used for public school mascots, logos or team names in Washington state. Her bill would effectively ban them unless the schools, for example, consult with and win a greenlight from related tribes.

"We've got 30 school districts that have Native American mascot names," Lekanoff said. "The bill really just says, 'Look to your neighbor and shake their hands and say, we want to honor you, how do we do this together, let's have a conversation.'"

Another of her bills, HB 1372, would see Washington state request the Library of Congress in Washington, D.C. to replace a statue of Marcus Whitman, who founded a mission in Walla Walla, with one of Billy Frank Jr., the Native American environmental activist.

Frank Jr. led the fight to restore tribal fishing rights in Washington and was posthumously awarded the Presidential Medal of Freedom in 2015.

The Whitman Statue would be returned to the state and displayed in Walla Walla County.

Lekanoff considers Frank Jr. a mentor and credits him with shaping her even-keeled approach to government affairs.

"He taught me...everyone has an opinion... but you have to be able to sit at the table, and share the ball, and stay focused on your goal," Lekanoff said. "For me, I need to ensure that generations look back at this time and say, 'Thank you for doing what you did.' That's what Billy taught me."