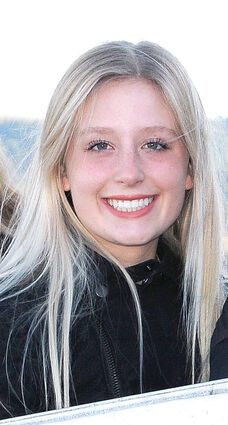 Ellie Hiatt ran cross country for the Wahkiakum Mules during her freshman and senior years.

"I did pretty well," she said.

She did, indeed. Ellie frequently placed in the top runners this year, finishing in 11th place in the District Championship.

It was all preparation for the main event. Soccer.

Ellie has been playing soccer since she was five. At 11 or 12, she made a bigger commitment to the sport, becoming a midfielder for an Oregon United Football Club team. She has been traveling to Portland multiple times a week for practice for years, sometimes going farther afield for games on the weekend.

Her team won the state championship four times, and they were likely to take the championship again this year, if it hadn't been for the pandemic. One year they even made it to the quarterfinals of a national tournament.

Because of her commitment, hard work, and athleticism, Ellie was recruited to play Division 1 Soccer. She has received a full ride to the Naval Academy in Annapolis, Maryland.

"I was looking at a number of different schools because I've been playing in national tournaments," Ellie said. "The Naval Academy had the most pros of any school as far as athletics and academics. I think it's going to up the most doors and pathways for me as I get older."

After she graduates from college, she will become an officer in the U.S. Navy, with a five year military requirement. If she decides to attend graduate school, that will be paid for too, and those years will be added on to her service requirement.

Right now, Ellie is not really sure what she wants to study. She is considering Political Science and Law, or Chemistry and medical school, but she could also end up a Navy pilot.

The sky is the limit, as they say.

Closer to home, Ellie likes all her teachers at Wahkiakum High School, but if she has to pick a favorite, it would probably be Mr. Stetzer, who has put in a lot of work and time to help her succeed in his classes. She's currently taking calculus with him, and studied geometry with him in the past.

As for her favorite subject, It's likely history.

Ellie was selected as homecoming queen this year, and has been involved in leadership, Key Club, mentoring and FFA.

For fun, Ellie likes spending time with her sister, who has taken up golf, and hanging out with her friends.

Ellie Hiatt is the daughter of Adrianne and Matt Hiatt.