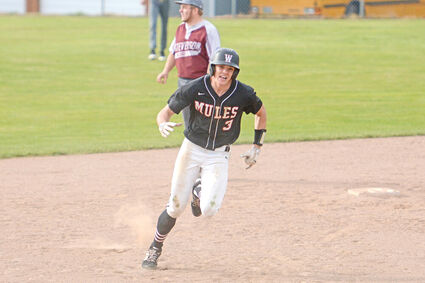 Jake Leitz smacked a triple against the Bulldogs.

The Wahkiakum Mule baseball team won two of three games this past week.

On Monday, the Mules defeated the Stevenson Bulldogs 6-2 in seven innings. 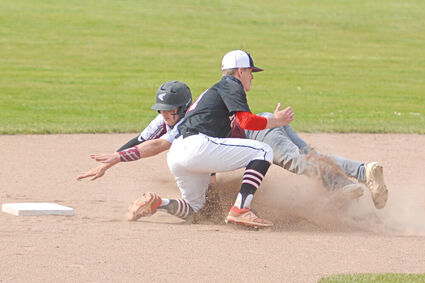 Brody Carlson puts a Stevenson runner out at second base.

"He threw a lot of strikes and limited base runners, and we played some solid defense behind him," Coach Marc Niemeyer reported.

At the plate, Beau Carlson had a double and a triple with five RBIs. Zakk Carlson was hot going 3/3 with a double.

Beau Carlson closed the game out and Tristan Collupy caught the whole game.

On April 14, the Mules scored 15 first inning runs and overwhelmed the Winlock Cardinals 21-4.

"We took advantage of walks and errors mixed with base hits and exploded the first inning," Coach Niemeyer said. "After the second inning, we got all the young guys in the game and they did a great job."

Last Saturday, the Mules traveled to Toutle and lost 8-0 to the Ducks.

The Mules host the Onalaska Loggers today (Thursday) in their season finale.