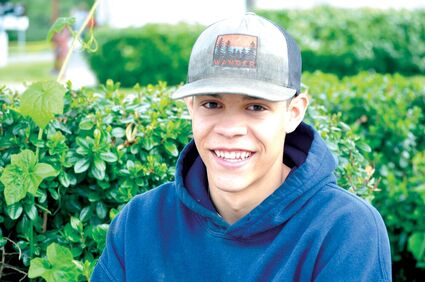 You might say that Zachary Brandon made his way to Cathlamet via an all terrain vehicle. It was while enjoying that particular sport that he first met and became good friends with Aaron Mahitka, who also attends Wahkiakum High School.

Originally from Astoria, Zachary is living with the Mahitka family and is pleased to be in Cathlamet.

"I love it a lot more than Astoria," he said. "The community is great. Everyone is nice."

His favorite teacher, Kyle Hurley, is a sometime employer.

"He helped me with my work ethic," Zachary said. "He gave me a job working in the oyster beds for him. I think he's a really good guy."

And, Zachary said, he can get into what Mr. Hurley is teaching. Zachary has learned to weld, use an Oxy torch to cut metal, and how to fabricate dumpsters, part of a community project that students have been working on.

He also enjoys Don Cox's history classes, where he has learned a lot about the two world wars, and American history.

Zachary turned out for football, basketball, and track at Wahkiakum, but has spent most of his time working this year. He went to Alaska last year to fish and will return this summer. He's even been out on the ocean, working in the crab industry.

He loves fishing, and hopes one day, when he is older, to be a commercial fisherman. His more immediate future may involve the Navy, but he is not yet certain.

Fishing and riding ATVs are favored activities, but he's also taken up duck hunting in recent years, and hopes to do more of that.

"Wahkiakum is a pretty good high school," Zachary said. "It's really small, you can connect with your teachers and really talk to them."