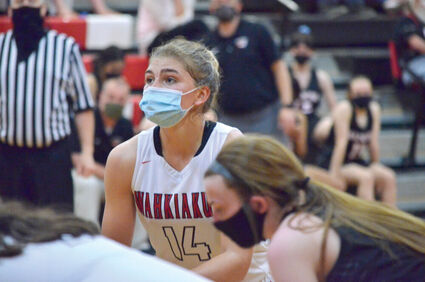 Jansi Merz scored 22 points and pulled down 11 boards against the Tigers.

They beat Napavine in their home opener last Wednesday, 57-29.

"I was super happy with our performance last night," Coach Rob Garrett said. "From a shooting standpoint it wasn't the best, but you can't control the outcome, you can only control the process. As coaches, that's what I really think we need to focus on, the process and how we are getting there, how hard are our kids working, what type of little things are they doing. I liked our ball movement last night, I liked our off ball movement. We've got two or three girls trying to rebound through the ball, which is a good problem to have. I was really excited to see that."

"I thought our energy was great," Garrett continued. "Obviously the girls have been waiting for a long time for that game to come and I thought they took advantage of it. I was happy to see my two senior studs, Jansi (Merz) and Paige (Mace), step up and lead by example. I thought they had phenomenal games, doing what they do best. I thought it was nice for Kamryn (Watkins) to come in and hit those three three's. That's what we expect her to do when she comes in. I think that could happen every game for her. She's a phenomenal shooter."

On Friday, the Lady Mules traveled to Toledo and won 71-43.

"It was a fun game," Coach Garrett said. "I thought the girls shot exceptionally well as a team. Our interior defense on Stacie (Spahr) was exceptional. Jansi (Merz) got us going and has been very consistent so far in this short season. She's playing with a ton of confidence and it's great to see. With that confidence, she will be tough to stop for our opponents." 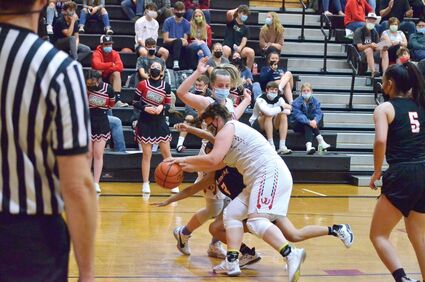 Kimberlee Watkins defends the ball after getting the rebound.

They played on Wednesday, but a score was not available by press time.

Garrett, who is also the athletic director, expressed appreciation for hometown fans during the pandemic.

"I was really happy with our fans," he said. "I think everybody is getting the big picture. Personally I hate all this stuff; I think everybody does. But I think the point is, we want these kids to be able to play the game they love again, and hopefully finish the entire season, and we can't do this without everybody's support."