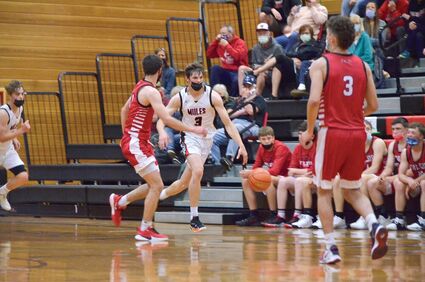 Jake Leitz posted double-doubles in the first four games of the season, including 21 points and 11 rebounds against Toledo.

Basketball season got off to a quick start for the Wahkiakum Mules boys, who have already played four games and are 2-2.

They began their season on the road with a loss to Napavine last Tuesday, 62-49.

"They came out and hit four of their first five threes' and put us on our heels," Coach Todd Souvenir said. "We trailed 2-12 to start the game. I thought after falling behind we played tight and nervous on both ends in the first half, but we cut the deficit to two midway through the fourth quarter only to have Napavine hit back to back threes to go up by eight."

"We moved the ball much better versus Toledo," Coach Souvenir said. "We got off to a good start only to let them back in the game in the second quarter. I thought we did a much better job of getting everyone involved and showing some emotion on and off the court."

"We played with a lot of energy on both ends against a very good and physical Ridgefield team," Coach Souvenir said. "We trailed the entire game but were always within striking distance. We just couldn't string enough stops combined with good looks to close the gap. They did a great job of keeping us out of the paint and closing out on our shooters.

Leitz continued his double-double streak with 22 points and 13 rebounds. Carlson had 16 points, Avalon scored 11, and LaBerge finished with two.

The boys traveled to Onalaska to play Toutle Lake on Tuesday night and won 60-53. 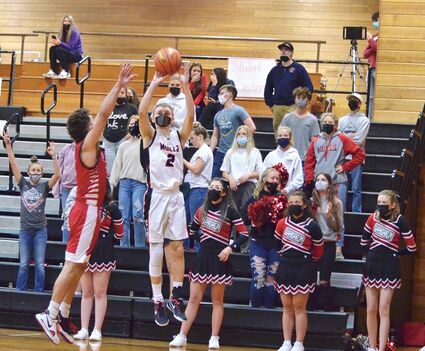 Logan LaBerge looked for three in the Mules' 68-47 win against Toledo.

"We got off to a good start with Avalon finding his range, and scoring 11 of his 20 points in the first quarter," Coach Souvenir said. "Defensively we did a good job on (Zach) Swanson but gave up too many open three's to (Connor) Cox who took advantage, going six for 10."

Logan (LaBerge) went four for six from behind the arc and did a good job of getting us into transition throughout the game," Souvenir added. "Down the stretch, Jake (Leitz) made some clutch shots to secure the win scoring 10 of his 21 points in the fourth."

Leitz had yet another double-double with 21 points and 14 rebounds. Avalon added 20 points and four steals. LaBerge had 14 points and seven rebounds, Dominic Curl chipped in five points.