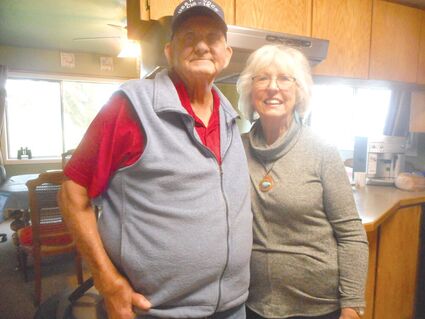 It's Tuesday and what a glorious day it is! Had coffee on the "west" deck so I could look at the "Naselle" rhododendron that's finally blooming. I see them in Naselle and tried to find one that was the right color to plant in my yard. It's taken that plant several years to bloom, but it's opening now and looks so lovely. Naselle always blooms ahead of us in Grays River.

Reminder: Lori Sharrow, family nurse practitioner NP for the Wellness Center, is taking new patients at this time. They take Medicare patients and work well with both Ocean Beach and Columbia Memorial Hospitals. I plan on signing up with Lori, so you might think about it, too. I've heard great things about her and hope to focus on her in this column soon.

Let's talk FOOD: I thought I'd start with our senior lunches and get the info out before your phone rings and you have to stop reading to answer it, thus losing out. There are two opportunities to get lunches. First is the CAP lunch every Thursday of the month. You can call Diane Hollenbeck at (360) 465-2991 to get more information, and if you want the CAP box lunch that is delivered to Rosburg Hall every Thursday from noon to 12:15, give her a call to reserve a box lunch for yourself. The menu for May 20 will be creamy paprika pork, mashed potatoes, tossed salad and sliced apricots. The second lunch opportunity is on two Wednesdays a month at noon at Rosburg Hall.

I hear several names for the groups but I call it the Senior Lunch Club because this group eats together. There are usually around 30 people. What better way to reconnect with friends and neighbors now that we can eat in person again. On May 19, the second lunch for May, this group will have a potluck. If plans go as shared with me, there will be a lunch with a theme one Wednesday a month and the second one will be a potluck. Why not come next week and check it out? I plan on attending because potlucks are the best meals ever, especially cooked by country women! And those homemade pickles are the best!

Photo of the Week: Speaking of country folks, I visited with Joel and Noreen Fitts at their home last Saturday. What a great pair they are. They've been married over 50 years, and you can see how devoted they are. Joel says marrying her was the best thing he's ever done, and she says the same. We are used to hearing about the promise of a wedding and about the sadness of marriages ending, but these two give you the realization of the joys of a successful marriage. They live on what is called, due to the long history of the early Sorenson family on the land, the Sorenson farm. But it's really the Fitts farm. Joel came out of the Navy in May of '64 and worked in California. There he met Noreen and they married in '74. In California, they had a farm that didn't do very well. They had come through Washington and Oregon on their honeymoon so they sold out, then moved to Grays River in '78. They read in the Capital Press about the Sorenson farm, then bought it. They had four kids and now have grandchildren.

Joel told me Noreen was perfect for him because she was a farm girl who loved animals. Several years ago, they sold half of their farm pasture to the Burkhalters, but they still have horses. Noreen told me she has always had a horse because she "just loves them." Most of her horses have lived into their 30's, a good indication of the love and care she gives them. Most of us know Betsy, her horse that pulls the little cart so they can drive around the Valley. Their daughter, Susan, and her husband, Mike Whalen, also live on the farm, and plans are for them to keep the farm going after Joel and Noreen are gone, a happy plan for Joel and Noreen.

Cowboy Poet: Joel has always loved the Old West. He plays the guitar and sings old songs as well as some he writes himself. After his father passed away, Joel's mother told him about an envelope she found in his father's things that had money in it and a note that said, "For Joel to have a guitar." Both his mother and father were musical, so there was always music in their home. Joel also plays a harmonica, so the gift of music has continued in his own family. He enjoys reciting poetry and often recites his own, and puts the poems to music. He has sung at funerals and weddings and other community events with his guitar and often recites his poetry. He and his son have sung at the Folk Festival in Astoria. He is also a serious cyclist. He recently got a new bicycle he is excited about, an electric three-wheeler.

Painter Noreen: After Noreen's mother died, she took up watercolor painting by taking classes with teachers out on the coast. Over the years, she has become well known and very successful with her paintings. Her paintings sell well at several venues including the Tsuga Gallery in Cathlamet. She often works there during the days they are open as many local artists do. It is open Wednesday through Saturday from 10 to 4. I myself have several of her paintings in my home and especially love one she did of my house and garden. It is a special joy to me.

Joel and Noreen are jewels in our Valley. They are both members of the Grays River Methodist Church. They were both close friends with Howard and Arlene Nelson. Since Howard died, the loss has been a tough one for them both. In the New Testament, Jesus tells his followers to care for and welcome strangers into their homes because you never know when you will host "angels unaware." I think of Joel and Noreen Fitts as "unseen angels" in our community. When Joel heard I had been falling quite a bit after cancer treatment and needed a railing for my back porch stairs, he came to see me and said, "you get the lumber and I'll build it." So he measured out exactly what he would need for two railings, I got the lumber and he built the railings just because he is that kind of man, a quiet "old cowboy" who believes in helping others. He is truly an "unseen angel."

Unseen Angels in your life: If you have an "unseen angel" in your life, I would be happy to share your story in this column. Just let me know. You can do it anonymously if you'd like. Angels are one of the best things about living in the country. They are everywhere.

Reminders: The Grays River Grange's next meeting will be on May 25 at 6:30 p.m. and the Finnish American Folk Festival group meets on May 23 at 3 p.m. at the Naselle Community Center. You are welcome at both groups, and if you're new to the area, consider joining one or both. And don't forget the car show "Cruzin to the Fair" on June 5. It is so much fun. Get it in your schedule. To get tickets, register your car or need info, call Kay Walters at (360) 795-3937. This car show is Fun!

Word for the Week: Angels