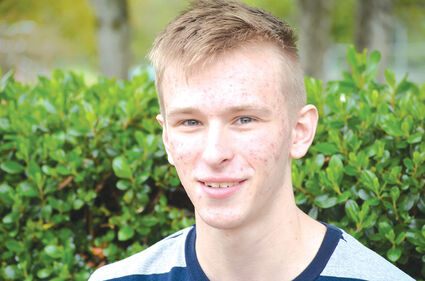 Tyson Hjaltalin is not sure what he's going to do next, but it's bound to be one of two things--gastronomy or astronomy.

One day he would like to open a restaurant. Or study the stars. Maybe both.

He's currently enamored with Korean cooking, thanks to his girlfriend and her family, who are from South Korea.

"It's not plain old food. They have lots of spicy foods," Tyson said, laughing. "I really like the spicy stuff!"

Tyson was born in Wahkiakum, but when he was young, he moved to the east coast, primarily Maryland and North Carolina.

"I miss the thunderstorms," Tyson said. "They are great. It was fun to watch my brothers freak out when they were young. Their dad would tell them that it was just God bowling."

About four years ago, Tyson returned to Washington and began his freshman year at Wahkiakum High School.

Kayli Hurley has been his favorite teacher since he was a sophomore.

"She has been there, helping me out," Tyson said. "I feel like I've grown a lot because of her. I'm a lot smarter!"

"She's helped me in many ways, in becoming who I am," he said, adding wisely: "Everyone can be part of who you become. One person can change how you look at things."

He took English and math with Miss Hurley, and math is a favorite.

He's practicing it while studying budgeting right now, a class that is helping seniors prepare for life after school.

Tyson was involved in the drama club for awhile, and performed in a one-act play called Love at First Thought during his sophomore year.

He's thinking about taking up the electric guitar someday and enjoys going on walks with friends in his spare time, or tackling any given creative projects that come to mind. Whether they succeed or fail, he's always learning.

Tyson is considering a return to North Carolina in the future, perhaps for just a while, and one day, this young man with an Icelandic last name I am hopeless to pronounce, plans to visit the country of its origin.

Tyson is the son of Jamie Hjaltalin.