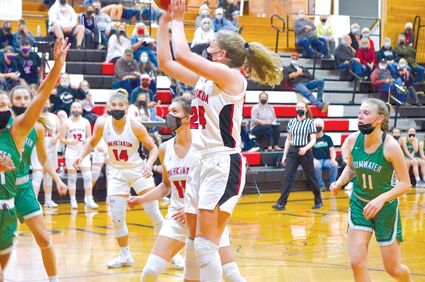 Megan Leitz shoots for two in the Lady Mules' 57-40 loss to 2A Tumwater.

The Lady Mules ran into a little competition this week, winning two of three games.

Last Thursday, the Lady Mules hosted a 2A Tumwater team after Adna had to cancel because of covid-19. The Lady Mules lost 57-40.

"We lost the Adna game with a day's notice," Coach Rob Garrett said. "I was able to get ahold of the coach from Tumwater and they were awesome enough to make the trip down on short notice. We were grateful to be playing a game and even more grateful for the challenge they presented. Tumwater is extremely fast and plays phenomenal defense. We struggled a bit early, but the girls had great energy the entire game and made a good push in the third quarter. Unfortunately, the hot shooting from Tumwater was too much to overcome on that night, but the match up provided great opportunities to grow from."

On Saturday, the Lady Mules traveled to Rainier, and won that game 58-38.

"We went back up to Rainier to face one of our tougher league opponents this season," Coach Garrett said. "It was an ugly game for both teams in the first half, but we were executing the defensive side of the game extremely well. Offensively, Jansi (Merz) took over in the third, scoring 14 points. That pushed us out ahead and the Mules never looked back, taking a convincing 20 point lead on the road."

Merz had a double double with 22 points and 13 rebounds. Niemela added 11 points and seven rebounds. Mace had seven points and six assists. Kerstetter and Niemeyer had six points apiece. Leitz had three points, Rose had two, and Courtney Carlson added one. 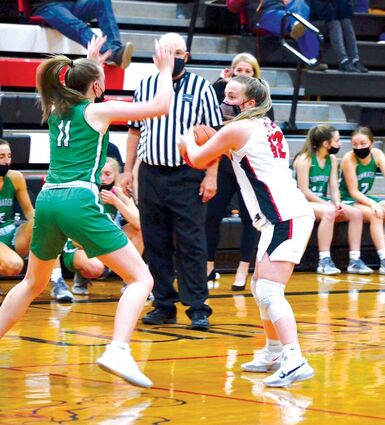 Miya Kerstetter looks to pass for the Lady Mules.

On Tuesday, the Mules traveled to Onalaska, and won 44-34.

"Onalaska simply out worked us," Coach Garrett said. "We are the better basketball team, no doubt, but you have to hand it to their girls for putting it all out there tonight. They certainly gave us all we could handle. Thankfully, defensively we were able to contain them and the hot shooting of Reigha Niemeyer was enough to give the Mules a 10 point win in a game we would like to quickly turn the page on."