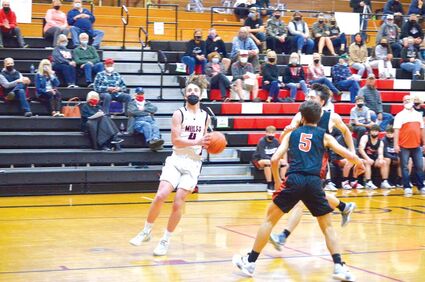 Brody Carlson scores tow on the fast break in the Mules' win over the Rainier Mountaineers.

The Wahkiakum Mule boys basketball team only played one game last week after a couple schools in the region had to cancel games because of covid-19.

On Friday, Wahkiakum hosted Rainier and won 67-49. The Mules got off to a hot start in the first quarter, Coach Todd Souvenir said, outscoring the Mountaineers 22-7, and shooting 42 percent from three point range.

"Their press kind of allowed us to get out and transition," Coach Souvenir said. "The guys wanted to play man to man, and we gave them that opportunity and they did really well at it. It seemed like we were a lot more active and played with more intensity on the defensive end and got some deflections and got out and transitioned. We shared the ball really well and got open looks, and they were good looks which is why we shot almost 40 percent from behind the arc for the game." 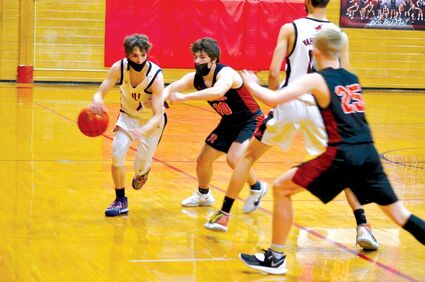 "Logan (LaBerge) had a great game offensively, and he also looked to push the ball and got us up and down the court and managed the game really well," Coach Souvenir added. "In the first offensive play of the game, Jake (Leitz) scored two of his eight points and came down and tweaked his ankle pretty bad. It was good timing to have the other guys step up, and shoot the ball really well, and take advantage of their opportunities."

The Mules travel to Morton/White Pass on Friday and play three more games next week.