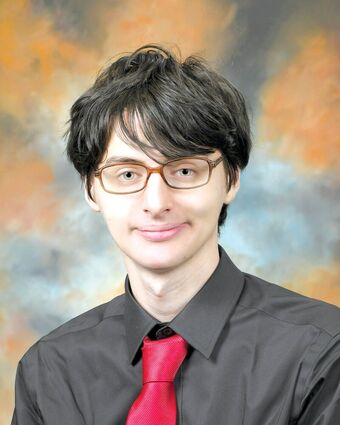 To use a phrase I haven't heard in years, Caden Tawater is a ham. His quick, dry wit had me laughing from the word go.

He spends much of his days in his favorite teacher's classroom. Kayli Hurley is kind, Caden said.

If he has to pick a favorite class or subject over the past four years, it has to be robotics, which he took with Jeff Rooklidge. It turns out that Caden enjoys building stuff.

Which might be why he loves HermitCraft on YouTube.com, a channel devoted to building in Minecraft by a group of professional content creators who are intent on entertaining themselves and anyone who watches.

Having played Minecraft for 12 to 13 years, Caden was exceptionally knowledgable on the subject and tried to explain it to this tenderfoot. If anyone failed in this exchange, it was easily me.

Caden would like to be a content creator on YouTube.com as well, but he wants his channel to revolve around video games, and playing them with other people.

His favorite game of late is called Destiny. He's trying to set up a raid right now, which requires a lot of communication to deal with the "unique gimmicks" that come with the different raids. Socializing is easier online, he said.

He participated in the Chess Club for most of high school, which he described as strategical and "pretty much addicting." He tried the Dungeons and Dragons Club, but much to his dismay, kind of got left behind.

Caden and his family came to Cathlamet from Georgia about 10 years ago.

"Georgia is not as frozen as a block of ice," Caden said, "but on the bright side, here it snows semi more often."

Along with the videos, he'd like to build with his Legos, but he says it can't be done without complaints from his little brother, Chandler.

The pair traded insults involving middle names I won't repeat but will admit, elicited a laugh.

It turns out Caden is double jointed and quite a contortionist. His mom, Ashley, joked that there might be a future for him as an extra in zombie movies.

Caden introduced the Derp face to the school, and it can be found everywhere in the halls.

"It's more of a little joke I started, but gradually skyrocketed," Caden said. "Principal Leitz loves the darn thing."

"Big things can change if you introduce a small object," he said. "Like a small rock can cause an avalanche."

Caden is the son of Ashley and Justin Tawater.