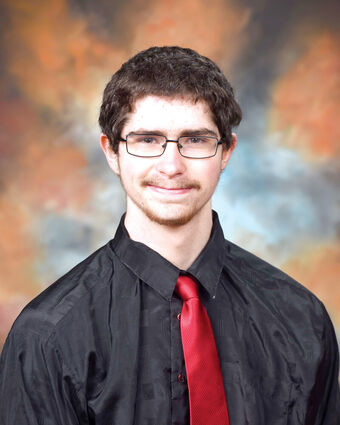 Cejay Bond grew up in Nebraska and Kansas, and when his family moved to the western end of Cowlitz County, he transferred to Wahkiakum as a freshman.

He has been studying remotely all year, which he has found to be a lot easier than being at school. He's currently taking two history classes, one English class, an engineering class, Spanish 2, and chemistry.

The engineering class is being taught at Wahkiakum, and is being overseen by Jeff Rooklidge. Cejay has been working on coding a game that he's designing.

"It's really alpha," he said," the only thing I've got complete is movement and making enemies. It's like Angry Birds but a little bit different."

His favorite teacher was Eli McElroy, a Wahkiakum alum who taught computer science and math at the high school for a couple years.

"He was pretty funny and an easy teacher to learn from," Cejay said. It doesn't hurt that math and computer science come easily to Cejay, and he enjoys them.

Last Friday, he completed his senior project, and like his classmates, he had to give a presentation on what he would like to do for a career, and how he would make it happen. He got a lot of useful tips on how to move forward, he said.

"I want to be a firefighter," Cejay said. "It was all the years of looking at how they've helped people's lives."

While at Wahkiakum High School, Cejay enjoyed the challenges in Chess Club, though he hasn't really had an opportunity to play lately because of the pandemic. He also participated in the Ham Radio Club, finding radios around the world and talking to people.

"It was alright," he laughed.

Cejay likes to play video games. His favorite game right now is League of Legends, or LOL for short. He also enjoys hiking in his free time, which he is luckily able to do right around his home.

"We have a big property," he said. "I usually hike around there."

Cejay is the son of Dustin and Elizabeth Bond.