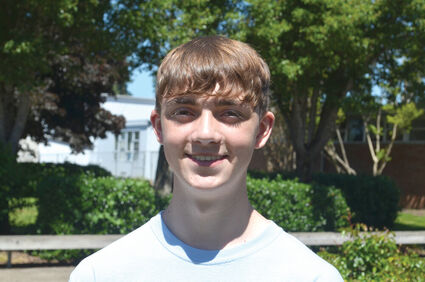 Tucker Thomas is from Wahkiakum and has attended school at Wahkiakum School District since he was in kindergarten.

"I've grown really close to a lot of my classmates," he said. "At a big school I doubt that really happens with your entire class."

He really appreciates a few of his teachers, but Don Cox is his "absolute favorite."

"I like the way he teaches," Tucker said. "It's not like, 'Oh, you have to learn this to take a test on it,' it's more like, 'This is cool; I want you to learn it, I want you to be involved.' It's like you do your own learning, you're not forced to learn what you're taught."

The seniors have been focusing on countries in Mr. Cox's classroom this year, doing "sit-reps" or situational reports.

"I thought that was really cool, because I like diving down rabbit holes and learning new things," Tucker said. "We are doing an essay on the Falkland Islands, which is cool because I found out about it before he put the essay out. I already had an idea about it."

Tucker has also enjoyed his time with Joel Stetzer and Jeff Rooklidge.

"Their stuff is hand's on and involved," he said. "Plus you get to blow up stuff in chemistry."

Tucker likes learning about history, but he's always loved math too, partly because he's good at it.

He was involved in Chess Club and joined the Key Club for a semester. He also played football, basketball, and was on the track team. He ran the 800 meters, the two miles, and participated in the triple jump.

In his spare time, he likes to help out at home, or go for drives. He also likes to hike, sometimes venturing out in the woods behind his house.

After graduation, he plans to work at Norpac over the summer. Eventually, he thinks he would like to be an electrician. Recently, Mr. Cox suggested to Tucker that he take a little time out to have some fun and go on a road trip, perhaps to some ghost towns in Nevada.

Tucker is the son of Charl Melton and Garth Thomas.