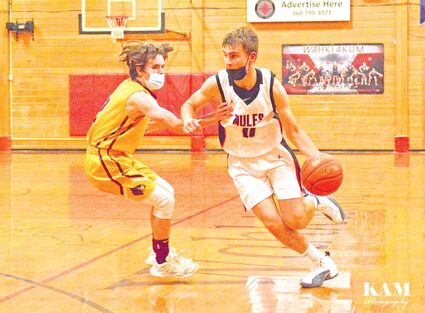 Brodie Avalon drives for the hoop in the Mules' win over Winlock.

The Wahkiakum High School Mules basketball team won four more games this week, including two on Monday and Tuesday in the district tournament to bring their overall record to 8-3. The Mules moved into the semifinals of the tournament on Wednesday against Napavine, but the score was not available by press time.

Last Wednesday, in the final week of regular season play, the Mules took a long road trip to Stevenson and beat the Bulldogs 88-49.

"It was a fun game after a long bus ride," Coach Todd Souvenir said. "We got off to a good start. The guys had a lot of fun and we played with a lot of energy. I challenged these guys to create for each other, have some fun, and move the ball, and I thought they did a really good job."

In the third quarter, Souvenir added, Brodie Avalon went five for five from the field, four of which were from three point range.

On Thursday, the Mules hosted Morton/White Pass, and avenged an earlier loss, beating the Timberwolves 75-41.

"We had a lot of excitement and energy to turn things around and take it to them," Coach Souvenir said. "I think the guys came out and did a really good job on both ends of the floor. We took over the game and had a lot of fun on senior night. It was good for the guys. Everybody got involved."

Leitz, who was 17 for 19 from two point range, according to Souvenir, scored a career high 35 points for the second time this season, both times in games against MWP. He also had 11 rebounds and five assists. Avalon added 14 points. LaBerge had 11 points and 10 rebounds. B. Carlson scored 10 points. Curl had five points. Niemeyer pulled down 11 boards.

On Friday, the boys were scheduled to face R.A. Long, but the game was canceled after members of the Longview team tested positive for covid-19.

The Mules hosted Winlock in the opening round of district games on Monday, and won, 68-43.

"We came out a little sluggish," Coach Souvenir said. "We did not move the ball very well in the first quarter, but we started moving the ball a little bit better and were able to end the half with a five point lead. At half time we talked about moving the ball, and creating for each other, and having a little bit of fun. In the third quarter we did that on both ends of the floor. We were able to break open the game, and give some of the guys some rest in preparation for the game the next day."

On Tuesday, the Mules beat Toledo in the quarterfinals of the district tournament 82-53.

"We wanted to get off to a fast start and share the ball, and continue the momentum that we built from the third quarter of the Winlock game," Coach Souvenir said.

"That's just sharing the ball and trusting each other," Coach Souvenir said. "Every time Jake touches the ball in the paint, our guys on the perimeter are going to get a good look, because he's going to be double teamed. As long as we move the ball, trust each other, and relocate on the offensive end, we can put up a lot of points." 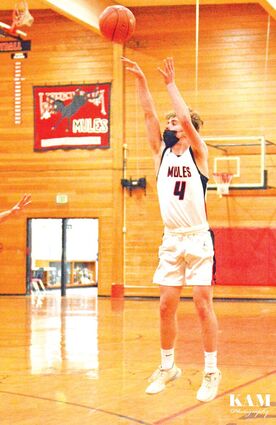 Mule Brody Carlson sends a long shot to the basket in the Mules' win over Winlock.