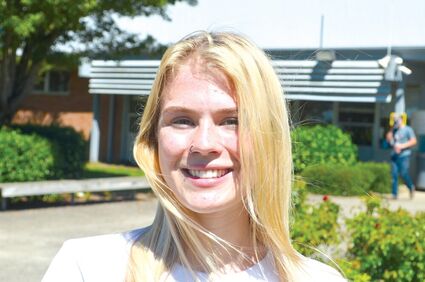 Shelby McEneny grew up at the fish hatchery in Grays River. While her brother attended school in Naselle, she traveled over KM every day with her mom to go to school in Cathlamet. Eventually, she drove herself.

She grinned when I asked about growing up on the fish hatchery.

"It was super fun," Shelby said. "There was a lot to do. Lots of swimming, a lot of people around the hatchery all the time, so whenever I was bored I would go over to the hatchery and ask if they needed help, and go out and feed the fish."

"He's super, super intelligent," she said. "He has a really good spin on his teaching, how he relates real world things with his personal stories, which really helps."

Shelby likes solving problems, and has enjoyed math, because there is only one right answer, unlike English. But math isn't her favorite thing.

"I don't know if this counts as a subject," Shelby said, "but I like welding. I like the hands on for welding. Building stuff is really cool. It's like an art."

Shelby has been welding in Kyle Hurley's classroom since she started high school four years ago, and she's gotten pretty good at it.

She loves it so much, she wants to incorporate it into her future career.

Shelby wants to open her own body shop one day, specializing in collision repair.

"Ever since I got my first car, I've been doing upgrades to it all the time," she said. "Tinting windows and more. I really want to advance in it. That's what I like. The paint part, the welding, and tacking things on. I'm really hands on and it involves everything I'm into."

This fall she will head to Walla Walla Community College to begin her studies in collision repair.

Shelby played volleyball, and participated in throwing events for the Mules track and field team every year except this one.

"My dad was a state champion, and my brother went to state in throwing events," Shelby said. "Dad bought us our own javelins and we would practice out in the fields all the time."

She also participated in Future Farmers of America and grew up in 4-H, showing goats and bunnies, as well as sewing and cooking.

In her spare time, Shelby likes to be outdoors, swimming and hiking.

Shelby is the daughter of Shane and Sherry McEneny.