The Bald Eagle is back 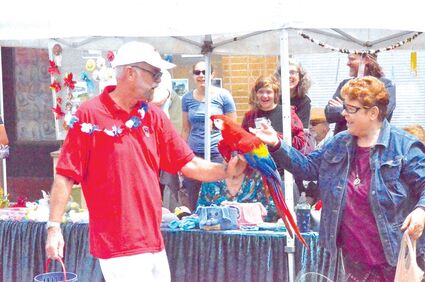 A parade participant stopped so a spectator could meet the brightly colored parrot.

After a year with no festival because of pandemic concerns, The Cathlamet Bald Eagle Days festival was back last weekend, and a good time was had by all.

Another Bald Eagle Days is in the books, and based on the number of people in attendance, it was a successful one. Up on Columbia Street, it was relatively quiet, but as the parade participants reached the bottom of the hill and Main Street, participants were met by a mass of people and vendors lining the route.

"I thought it went really well," Wahkiakum Chamber of Commerce Director Stacey Lane said on Tuesday. "There are always surprises that catch you at the end. Let's just say that this one kept me on my toes. For our [new Chamber staff] first one, it went remarkably well."

Lane was pleased with the parade and the fireworks.

"I love the uniqueness [Alpha Pyrotechnics] chose for our fireworks show," Lane said. "They build those for us, which is very cool."

According to Lane, there was a last minute decision to raise some more money for the fireworks, which cost a little more this year, and the Puget Island Fire Department stepped up with a Fill the Boot campaign during the parade.

"That helps a lot," Lane said. "People were very generous donating to the cause."

"A lot of people showed up, and what I noticed, because I hear people leave after the parade and the streets clear off," Lane said, "there were still a lot of people still out at 5 o'clock. I think people have been hungry to be engaged."

Her favorite part of the day was the ribbon cutting on Main Street to officially re-open Cathlamet.

"Our hope is that it stays open," Lane said.

Lane praised her new event coordinator, Monica Budd, as well as some other volunteers on the chamber board.

"They went way above and beyond," she said. "I was thrilled with how everything turned out."

I’m honored that you selected my scarlet macaw, Jazz, and me for your published photo for the Bald Eagle Days. We participated on behalf of the Portland Yacht Club, Commodore Floyd Jones and First Lady Barbara Thompson. PYC has a long history of participating in the Bald Eagle Days and I now know why - a very special town, great people and a wonderful event. Thank you for your hospitality. See you next year!