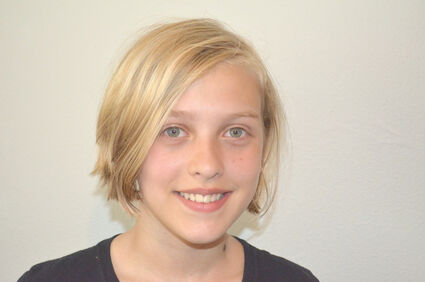 Ka'vi Welker, 14, of Cathlamet, may have joined the Wahkiakum County Fair Court thanks to a bit of fast talking by some smooth characters in Skamokawa.

"I didn't really understand what was going on," Ka'vi said. "People at the fairgrounds thought I should do this."

"They didn't really explain," she said, dryer than dry.

It hasn't been too bad. She got to enjoy some of the usual perks of being a fair princess. She was in a parade and recently attended the Cowlitz County Fair.

Ka'vi is a derivation of a Hawaiian name, and while struggling to remember how to pronounce the moniker, I decided it was very similar to how I might say one of the islands of Hawaii: Kauai, with the "vi" rhyming with "why."

She's been here for about a year and a half, and has lived in Shelton and Redding, Calif.

She played volleyball in middle school but isn't certain what her freshman year at Wahkiakum High School will look like. She may attend; she might stay remote.

Ka'vi likes to read and paint in her spare time, and not only loves music from the 1980's but is also pretty knowledgeable about it.

She is planning a bake sale to raise money for the Wahkiakum County Fair, which she has never attended, and has been selling raffle tickets for a hotel room at Lincoln City. Watch for posts on Facebook by her grandmother, Trish Rafferty.