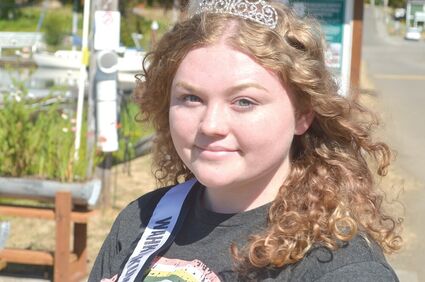 Wahkiakum County Fair Princess Madison Meyer, 19, of Puget Island, graduated from Washougal High School in 2020 and plans to attend Portland Community College in the fall. One day, she hopes to be a teacher in an elementary school.

She decided to get involved in the fair court this year after learning about it at a farmer's market at the fairgrounds in Skamokawa.

I just wanted to do something fun, especially since I'm new, I could meet people."

Madison likes her new community and is currently looking for a job and practicing to get her driver's license.

She's never participated in 4-H but she has been to the Wahkiakum County Fair, where she says the goats once tried to eat her hair.

"I loved the animals," Madison said. "I liked going to the fair, and I want to support what they do."

Supporting the fair is pretty much what the fair court does every year: fundraising. The person to raise the most money wins the crown, and is named fair queen.

Madison has held one bake sale and plans to do another one a week before the fair. She also has fair tickets and is raffling a one night stay at a casino. Watch Facebook for an announcement for when and where.

Madison is the daughter of Craig and Stacy Rogers.