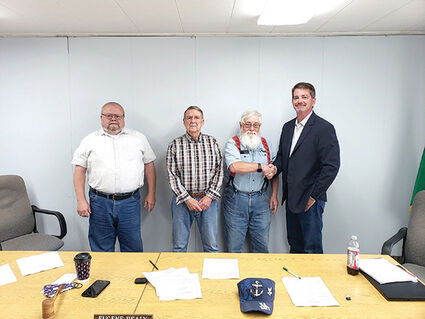 On Tuesday, the Wahkiakum County PUD Board of Commissioners listened to reports, learned about assistance programs, and appointed a new general manager, Daniel Kay, to replace Dave Tramblie, who announced his plans to retire this year.

Kay thanked everyone for a supportive process after commissioners approved a resolution to appoint him as general manager of the district effective September 3, with a maximum salary of $148,000. He is authorized to begin duties in a limited capacity for training purposes beginning August 26.

"I appreciate your confidence in my ability to do the job," he said.

After Commissioner Dennis Reid expressed frustration with news sources that were failing to clarify that some utilities would not benefit from Bonneville Power Administration's plan to reduce the cost of power, General Manager Dave Tramblie responded.

"BPA has issued their final decision on rates and between a slight decrease in our power rates and a rather substantial increase in the transmission rates, the total impact should be negligible to Wahkiakum PUD," Tramblie said. "At this time I do not expect to propose any rate increases based on that information."

A project to convert overhead lines to underground on Covered Bridge Road was completed on Monday, and a concurrent water main pipe upgrade is expected to be done by the end of the week.

"As long as we were trenching the electric, we thought we should replace the water as well," Tramblie said.

The PUD is starting a project in a cross country Deep River area to remove old conductor and install new poles, and will take advantage of the intertie with Pacific PUD to do the work, beginning August 9.

"It's been dry enough we can get our equipment out there," Tramblie said. "It's a great project, good timing. Right now I'm just waiting for the conductor to arrive."

He told commissioners that the PUD has been able to find the materials they need for ongoing projects, but costs were higher than in the past.

Customers are falling behind in payments because of the pandemic, and currently there is about $33,000 that is 90 days past due at Wahkiakum PUD, according to Auditor Erin Wilson.

"We are encouraging people to apply for the assistance that is available," Wilson added.

For more on some of these programs, go to https://www.co.wahkiakum.wa.us/244/Community-Outreach