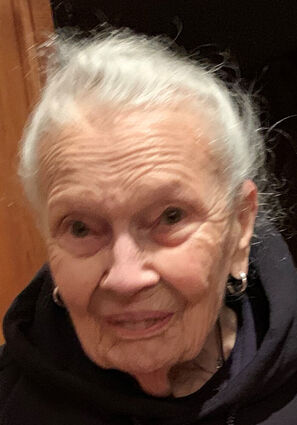 Elizabeth (Liz) Sears died peacefully at home in Edmonds, WA on June 29, 2021, after a long and inspiring life of teaching, mentoring, and giving to others, always striving to improve this world. Born in Eatonville, WA to Robert and Jane Goodfellow, at the age of three she moved to Cathlamet, WA where her father set up the first pharmacy in Wahkiakum County. While attending Wahkiakum High School, she played the glockenspiel in the school band, edited the newspaper and annual, and designed the kicking-mule logo that is still used today. Following graduation, she attended the University of Washington, majoring in pre-med/pharmacy. After marrying Warren Sears, she put her education on hold to raise their son, Craig, and daughter, Kathleen.

Following her divorce, Liz resumed her studies, receiving a secondary science teaching certificate at Western Washington College and a Master's in Education at the University of Washington. Enthralled by the natural beauty and good schools in Edmonds, she accepted a job teaching science at Edmonds Junior High (now the Edmonds Center for the Arts). It soon became clear that teaching science was her true calling and passion. In 1963 she was recruited to help set up the science department at the new Meadowdale High School, where she taught biology, marine biology, zoology, and botany. She wrote most of her own curriculum materials, was a pioneer in environmental and outdoor education in the Edmonds School District and was the first science teacher in the district to take students on extended field trips. Her summers alternated between teaching science and environmental education classes at Central and Western Washington Colleges and the University of Washington, and conducting scientific research in such far-flung places as the Galapagos Islands, Mongolia, Ethiopia, Borneo, Papua New Guinea, and Kenya. The knowledge she gained she brought back to her classroom to share with her students, who marveled at her adventurous spirit.

In 1974, Liz received the well-deserved honor of Washington State Teacher of the Year. Affectionately nicknamed "Mother Nature," she was beloved by her students, many of whom credited her with inspiring their future careers and who continued to visit her at her home up to the time of her death.

Liz was active in local environmental advocacy, especially protecting the Edmonds' waterfront and beaches. After the Shoreline Management Act was passed in 1972, she served on the Shoreline Management Citizen's Advisory Committee, charged with developing guidelines for its implementation. As a member of the Brackett's Landing Task Force, she lobbied to make Brackett's Landing a marine sanctuary. For many years, the Edmonds' waterfront was a valuable resource for her marine biology classes.

After retiring from Meadowdale High School, Liz continued to be an active teacher and learner. She taught in China for three years and was awarded Shanghai's prestigious Golden Magnolia Award for her outstanding educational contributions. Locally, she volunteered for the Edmonds Library "Talk Time" program to help English language learners, taught and took classes at the Edmonds Community College Creative Retirement Institute, served on the scholarship committee for American Association of University Women, and continued to be a strong voice for preserving the natural beauty of Edmonds. She was a Buddhist and Unitarian. Liz Sears was an extraordinary person, admired and respected by those who knew her professionally and deeply loved by her family, friends, students and the many dogs she rescued and cared for over the years.

She is survived by her children, Kathleen (Bob Mazelow), Craig Sears (Evonne), their daughter Jesse Westcott and her three children, her sister Merrie Emmons (Bud), and many nieces and nephews.

Supporting women in science and protecting animals were extremely important to Liz so the family suggests those who wish to make a charitable contribution in her honor consider a donation to the SnoKing American Association of University Women awarding scholarships to female students pursuing a career in a Science, Technology, Engineering, or Math (Foundation A3E, P.O. Box 722, Lynnwood, WA 98036-9998) or to an animal welfare organization of your choice.