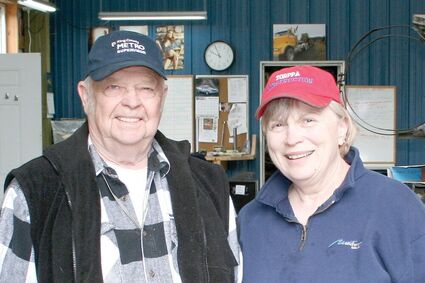 Karen Bertroch and her favorite log truck driver, Howard Nelson, also known as "Hammer Down" who worked for both Crown and DeBriae Logging. His logging career started in Roseburg, Ore. and like most logging drivers, he drove all over Washington and Oregon before settling in Deep River with his wife, Arlene, and their family. Courtesy photo.

SR 4 is a pain. We all agree on that. I know using SR 4 for jobs and appointments is a pain. Trying to keep to a schedule can be brutal, but the DOT has to work on highways within a certain summer time frame. I guess the issue is understanding we're all in the same boat. I take the ferry, drive HWY 30 to the Longview bridge and "cross over the bridge," as the old song says. Let's all be as patient as we can!

Photo of the Week: For those new to the area, logging trucks may sometimes be annoying, but they are part of our culture in Wahkiakum County. Here's a little background for you. Over the last 100 years, trucks have evolved into being the best way to get logs to sawmills miles away. We no longer have railroad lines running through watersheds like the Elochoman. For many decades, Crown Zellerbach was the primary company employing several hundred workers in the county. Then a corporate raider, Sir James Goldsmith, took control of Crown Zellerbach, the timber and wood products giant, and began dismantling the corporation.

For many years the firm and its numerous parent companies had played an active role in the forests along the lower Columbia River. Crown's vast holdings included the Cathlamet and Pacific Tree Farms, encompassing some 130,000 acres of southwest Washington State. Crown began its active logging operations in Wahkiakum County in 1924 under the banner of the Crown-Willamette Paper Company, and for 35 years maintained a logging railroad in the Elochoman River watershed. In the ensuing decade Crown Zellerbach and its small army of contractors harvested timber in the Brookfield area, north of Skamokawa, around the headwaters of the Naselle River, and as far west as Nemah.

Beyond logging, the company was an early leader in corporate reforestation efforts. When Crown Zellerbach idled its equipment in 1985, several hundred local loggers were put out of work. Brian Elliott of Dahlia on Altoona -Pillar Rock Road, told Irene Martin in her book, Beach of Heaven, "When I started working for Crown, you expected to retire from there. That way of life - with the huge company logging crews – it's gone. They'll never come back."

Many look back now with pride that they were Crown Zellerbach loggers and drivers. Some of those who worked for Crown and Weyerhaeuser went on to develop their own local companies. Jerry DeBriae was raised in Ryderwood, then came to Cathlamet and founded Jerry DeBriae Logging. He has continually added to the local economy by moving cut timber to sawmills all over SW Washington and NW Oregon. He was fire chief in Cathlamet for many years and helped build the fire hall there. As we think of what sustains our county, it's good to remember our current local economy is still supported by smaller companies like DeBriae and Ohrberg, Torppa, Nygaard, and Wirkkala.

The photo for this week shows Howard Nelson and myself. Howard drove logging trucks in his early years in Roseburg, Ore., and dump trucks in his final working years in Grays River. He had a large family to support and he did it by climbing into a logging truck in the early hours of every morning.

Appelo Archives Loggers Reunion: Over the past years, the loggers reunion has become a community event where loggers, log truck drivers and their families were invited to come together at a picnic in the area, or at the Archives Center. Over the past years, fewer and fewer folks have come who worked for Crown as we are losing them as they age. The annual reunion held by the Archives Center is a unique way for younger and older timber workers from all over the Lower Columbia to gather and see friends they worked with. The Reunion is scheduled for August 21 at the Archives Center in Naselle.

Witness Tree: A five minute film on the Columbia Land Trust's website shows a local "Witness Tree." On their website look for work, then Grays River, then Witness Tree. My neighbor, Bob Pyle, explains the story around the tree and the film shows some pristine forests in our own county. Their website is: http://www.columbialandtrust.org.

County's shoreline management meeting at Johnson Park on Wednesday, August 4: As reported in last week's Eagle regarding the first meeting at the courthouse, the second meeting was held at Johnson Park with the same agenda. I tried to Zoom into the meeting, but only caught words here and there. The meeting lasted an hour with issues aligned with similar ones from the courthouse meeting. Grandfathering land use was one, with questions from landowners. Nick Nikkala represented the advisory board for both meetings and helped attendees understand the process. Goals adapted by the advisory board include making the draft more understandable; making sure provisions weren't more stringent than those found in shoreline management programs (SMP) from other counties; reducing requirements for expensive studies and addressing concerns of the public. Your comments can be sent to the Clerk of the Board of Commissioners, PO Box 586, Cathlamet WA 98612 by August 19. Comments should be in writing and reference specific language in the proposed draft.

School board meeting: The next Naselle/Grays River Valley School Board meeting will be August 17 at 6:30 p.m.

The Senior Lunch Club's next potluck gathering will be August 18 at noon at Rosburg Hall.

Annual Loggers Reunion will be held on August 21 at the Appelo Archives Center.

Naselle Community Center Outdoor Market: Next market will be held August 21 at the Center from 9 a.m. to 1 p.m.

Wahkiakum County Fair will be held on August 19, 20 and 21 at the Fairgrounds in Skamokawa.

Spelling Bee at fair on Saturday, August 21 at 1:00 p.m. with registration at noon. Sponsored by Grays River and Skamokawa Granges.

Carol Penttila's Celebration of Life will be August 28 at 1 p.m. at the Naselle Community Center.

Word for the Week: Service.