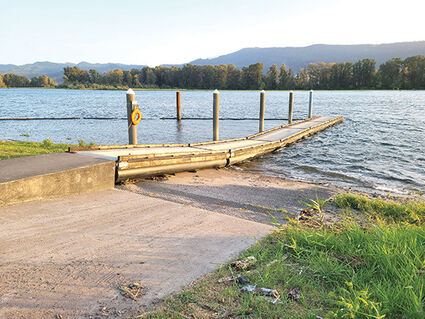 The development of Svensen Park on Puget Island was a major topic of discussion when the Port District 2 board of commissioners met Tuesday.

Svensen Park on West Sunny Sands Road has a boat launching ramp, some picnic tables, a canopy formerly used by park hosts and few other facilities.

Smith said people have been parking on an unused septic drain field, and he recommended placing a line of boulders around it to keep vehicles off.

There is no restroom at the park. Commission Chair Brian O'Connor said port staff were unable to achieve initial plans for a wood frame or concrete restroom building because of legal issues and lack of funding.

Park neighbors commented the port has been unable to complete many plans and maintain plantings since the park was opened. Maintenance was better under a now-departed park host, and they added that park patrons can be very noisy at times.

O'Connor commented that more needs to be done with the park and its management. Commissioner Allen Bennett said the commission should gather suggestions for park development and move forward.

In other business, commissioners approved Smith's recommendation to levy a charge on people who come to Vista Park to fill up large water containers, which happens during the dry season and wells dry up.

"One person comes every day and takes 40 to 50 gallons," Smith said. "There's not a lot of different people, but they take a lot."

Commissioner Austin Burkhalter said he had surveyed Westend residents about possible port activities in that area. One suggestion, he said, was to create and install signs highlighting tourist attractions. Also, he wondered if the port could work with the Grays River Grange to improve the parking lot at Alberg Park, which the Grange provides on land it owns at one end of the Grays River Covered Bridge.

Port Attorney Tim Hanigan said he would research if the port, a governmental body, could work with the Grange, a non-government organization.

Commissioner Bennett said the port could assist the Grange in obtaining grant funding for various projects.

O'Connor suggested developing a playground, which would attract families to a park.

"That's the demographic we want," he said.