On Monday, Chinook Heritage signs were installed at Queen Sally's Park, which is located next to the Pioneer Community Center in Cathlamet, as well as near the new viewing deck at the Elochoman Slough Marina.

According to town Council Member David Olson, the design and fabrication of the signs were made possible thanks to a "generous" grant from the Lewis & Clark Trail Stewardship Endowment.

He expressed appreciation for the "cooperation and goodwill of the Chinook Indian Nation including Tribal Chairman Tony Johnson and sign designer Cherie Crowley." 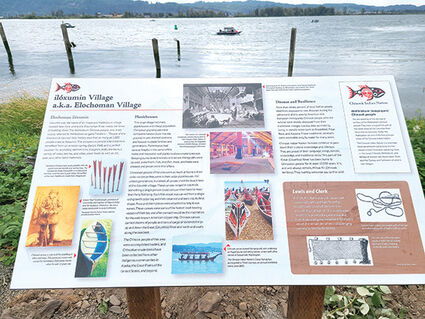 A dedication ceremony is tentatively planned for November 6, at noon, following confirmation from Port District 1, the Wahkiakum Chamber of Commerce, and the Chinook Indian Nation.

"At that time we hope to recognize and honor living Chinookan descendants associated with Wahkiakum County, including descendants of Queen Sally as well as the Scarborough family," Olson said.

"Thanks to everyone who has helped bring this two year plus process toward a successful and historic conclusion," Olson said. "This includes unanimous support for these signs expressed by the Cathlamet Town Council, the Wahkiakum County Commission and the Chinook Tribal Council."