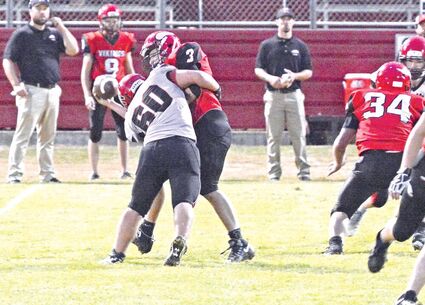 The Wahkiakum Mule football team picked up its second win of the season last Friday, downing the Mossyrock Vikings 28-24.

Because of the Vikings' low number of players, the teams fielded eight-man teams, and it took the Mules, used to the 11-man game, a while to adjust.

The teams traded scores in the first quarter, with Mossyrock leading 16-14 after 12 minutes. Jacob Johnson hauled in a Brodie Avalon pass for a 49-yard Mule touchdown at 4:16, and Gabe Moon scored on a 40-yard run with 1:49 left in the quarter. 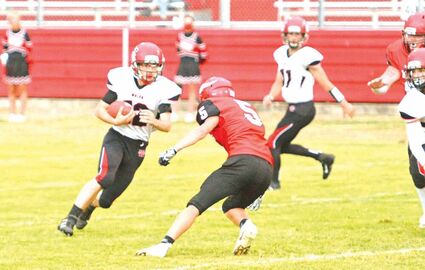 Elijah Cothren picks up some yardage for the Mules.

After a scoreless second quarter, the Mules took the lead early in the third quarter, with Avalon connecting with Moon on a 49-yard scoring pass play. Dominic Curl put the Mules up 28-16 with 8:46 left in the game on a 3-yard run. The Vikings scored to cut the lead to 28-24, but the Mules held on to win.

The Mules return to the 11-man game this Friday when they host the Onalaska Loggers, who are the reigning Class 2B champions.