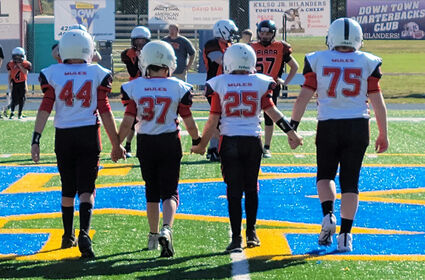 Story and photo by Brad Moon

The Wahkiakum Mini-Mules kicked off their 2021 season with a win over the Kalama Chinooks in Kelso on Saturday, winning a tough game 12-6.

With eight sixth grade students leading the young team, they went straight to work on defense on Kalama’s first possession, forcing a turnover in Kalama territory. After an offside penalty on the Chinooks, fullback Joe Merz busted through the line for a 30 yard scamper and a touchdown on the first offensive play of the season for a 6-0 lead.

Offensive lineman Aiden Scott surprised the stadium with a 50 yard punt to bury the Chinooks deep in their territory later in the first half.

Halfback Josh Moon ran for about 20 yards to get the Mini-Mules deep into Kalama territory, which was further aided by a late-hit penalty. Four plays later, quarterback Chris Stewart handed the ball to Moon, who busted through a giant hole in the middle of the line and dove for the end zone for Wahkiakum’s second touchdown, giving the Mini-Mules a 12-0 lead.

A late, long touchdown by Kalama just before halftime halved the lead to 12-6. The score remained as the Chinooks marched down the field late in the fourth quarter. A big hit by Moon jarred the ball loose, which was recovered by Merz. The Mini-Mules ran the clock out, securing the win 12-6.

The Mini-Mules play their only home game of the season this Saturday at Wahkiakum High School. The game, set to kick off at 1:30 p.m., will be against the Rainier, OR youth football team. Fans are invited to attend the game. There is no admission fee for entry. Snack-type concessions will be available.