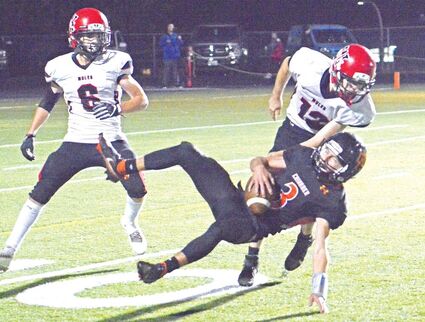 Mule Elijah Cothren delivers a big hit on a Kalama running back.

The Kalama Chinooks jumped to a 35-0 first quarter lead enroute to a 42-0 win over the Wahkiakum Mules last Friday. 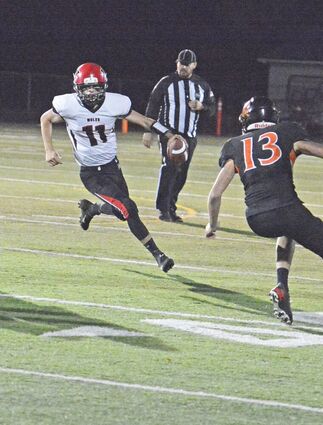 The host took the opening drive in for a score and took advantage of Mule miscues on two subsequent kick offs to put three touchdowns before the Mules could run an offensive play. Kalama added another seven points in the second quarter to lead 42-0 at halftime.

The hosts dominated with a passing game, completing 15 of 26 passes for 251 yards of offense while adding another 115 on the ground. The Mules had 110 yards on the ground and none in the air.

Gabe Moon led the Mule offense with 57 yards on 13 carries; Elijah Cothren had 26, Dominic Curl 19 and Brodie Avalon eight. Curl and Moon each made eight tackles; Moon recorded a quarterback sack and batted down a Kalama pass; Jacob Johnson batted down two passes and Tanner Collupy knocked down one.

This Friday, the 3-2 Mules host the 4-2 Adna Pirates in Wahkiakum's last scheduled home game. It will be senior recognition night.