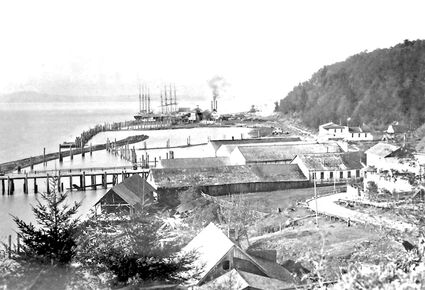 Some history on roads: The inconvenient second site closure on 401 gives me pause to be thinking of the years before "official" roads were built. Folks in the pioneering years (1850's to early 20th century) used water for their transportation. As the small communities grew, and wanted to be connected, boats were their primary mode to travel back and forth. There were several early larger boats that took mail, produce, people and shoppers back and forth from Astoria to the small towns along the Columbia. In very early years, settlers and farmers came together with their own oxen, horses and mules to pull out trees, then use those trees to lay down for roadbeds. Gatherings for road building meant they all would bring their animals as well as all the family members to a spot where they wanted a road. Workers focused on developing roads that could last through seasons of heavy rain. It was a slow process, but it worked. When the roads became useable for more modern transportation, the towns began to build their buildings facing the roads rather than the river. This change along the Columbia was described as "turning our backs on the River."

A piece that Carlton Appelo wrote on the area's history includes a paragraph on highway 401: "The highway road was built in 1960 with the whole Knappton hillside on a geological fault. As they were building the grade on the upland side, everyday it would be down to grade until the next day when it would raise a couple feet. The pressure of the hill just kept pushing it up. Finally, the highway engineers said if we can't beat it, we will change it. They put fill right out into the Columbia River, right through the sawmill site, so there is piling on the outside of the road and there is piling on the inside. The grade has always been a challenge."

From Irene Martin's book Beach of Heaven (p.104) regarding county roads history: "School consolidation was only possible with the construction of better roads, in particular the Ocean Beach Highway. Although people had sought such a road since at least the 1920's, work parties organized by local citizens began constructing their own road between Kelso and Cathlamet, and through Skamokawa's west valley toward Grays River. They used the trestles of the logging railroad over the top of KM Mountain as part of the road. The section of Ocean Beach Highway that was constructed between Kelso and Cathlamet was dedicated in 1930.

The development of SR 4 (also known as the Ocean Beach Highway) coincided with the depression, a combination that aided the shift of Wahkiakum's value-added processing industries to more distant locales. The depression also saw the development of the Civilian Conservation Corps, with two camps located in Wahkiakum County, one in Grays River and one in Cathlamet on the Elochoman. The road was one of the catalysts that made the camps possible, as it provided access to the surrounding region where firefighting and treeplanting skills might be needed. When the camps disbanded in 1942, many young men settled in the area." Everyone should read this book to understand our unique history.

Photo of the Week: This shot of Knappton was taken when the sailing ships with tall masts came to Knappton to load lumber. Many masts came from western Washington, from Knappton north to Aberdeen where ships were built. You can see sawmills, docks and part of the popular town that had a hotel, tennis courts and many homes going up the hill toward Naselle on the east side of 401. The pilings seen at the bottom of 401 supported Knappton's structure before the whole town burned in a fire in July 1941.

November 20: Duck Inn sponsoring a Shop with a Cop All You Can Eat Barbeue Fundraiser for $30 per person. 10% of sales.

Thursday, November 25: Thanksgiving. Two community meals will be offered in the Skamokawa area. Duck Inn from noon to 6 p.m. $25 with $5 of it to the Sheriff's Shop with a Cop program, or Skamokawa Grange Potluck at 2 p.m.

Wednesday, November 17: Senior Lunch Club will have their potluck luncheon.

Word for the Week: Breathe