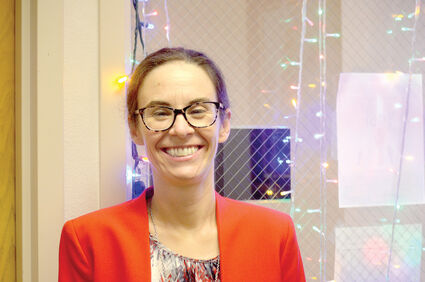 Shannon Eddy is the new deputy prosecutor for Wahkiakum County. She came to Cathlamet by way of Othello, but she began her career in Alaska, where she lived for about 15 years.

"I wanted to be a newscaster," Eddy said. "I tried working in television production for about a year or two out of college. It's such a competitive market that if you want to be on camera, everyone is working for free. It's hard to make a living. I got tired of just being poor, and working three different jobs."

Eddy, who had gotten a degree in communications from Western Washington University, decided it was time for a change. A friend's boyfriend, who was attending law school at the time, asked if she would like to attend a class with him.

"I could do that," she thought. "That looks fascinating."

Eddy went on to get a law degree from the University of Oregon, and then headed north to Alaska, when she was given an opportunity to work as a law clerk for a criminal superior court judge.

This new opportunity just happened to fulfill an old daydream she liked to meditate on during her daily jog as an undergraduate in Bellingham.

"When I went to Western, I always saw the ferry taking off for Alaska on Friday afternoons, and I thought someday I want to be on the ferry going to Alaska to explore the last frontier."

While there, she was recruited by the Anchorage District Attorney's Office, and thus she began her prosecution career.

"I was moved around within the department of law in different capacities," Eddy said. "I was a misdemeanor attorney and did some juvenile law."

The call of family was ever present. She headed south to Deschutes County, Ore., in order to be near them, but soon realized she missed Alaska, and so when another opportunity presented itself, she returned and found herself working in "bootlegging prosecution."

"I was the alcohol interdiction prosecutor," Eddy said, "which was a pretty unique niche. Local communities vote on what they want regarding alcohol. In my mind, I would travel around and enforce the laws that were voted into effect by the villages themselves."

"My career was driven by adventure and wanting to explore Alaska. In the beginning," Eddy said, pausing before adding, "and in the middle."

An earthquake that damaged her home and the old pull to family brought her back to Washington. She worked in Othello for a couple years and now she will use her expertise in criminal law as deputy prosecutor in Wahkiakum County.

In her free time Eddy loves to hike with her dogs, a couple of rescue Husky mixes.