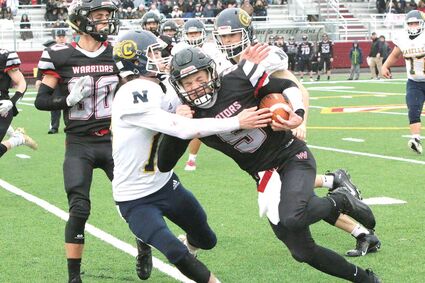 Football Report: Comets ended the season last Saturday with nine wins and just two losses and eventually fell to the #1 ranked 1B team in the state, Almira-Coulee Hartline, by a score of 68-32 in the state semifinals. It was the last game for seniors Jason Harman, Jack D'Agostino, Joe Strange, George Wilson, Riley Thorsen, Craig Reitz, and Trent Stephens. This was the first year for Comet football head coach (36th year of coaching) Kevin McNulty. McNulty is a Naselle alumni, 1981 graduate. McNulty took over the head coach reins this fall.

Superintendent Lisa Nelson commented: "We are very proud of our coaches, athletes, parents and fans who provided their faithful support and undying loyalty to the Comet football team this season. Great job. And congratulations to Kevin McNulty for being selected as our football league's 1B coach of the year!"

From volleyball, a story of community and Thanksgiving taken from Kayti Updike's Facebook page. "As many of you know, our Lady Comets just placed fifth at volleyball state! After being hit by a large rock on the road to Yakima, one of our school vans completely broke down leaving some of our girls stranded, and nearly running late for the only practice they would get on the east side before their first game at the SunDome. We were all out of cell-phone service and no matter what we tried, the van would not start. Just as we were about to start panicking over these logistics, we looked up and saw Raymond's school bus turn around and pull alongside. Their coach got out with a mask on his face, and a halo over his head, and offered to take our girls to state. That's how many of our girls got there, from the kindness and hospitality of another team.

"Then while Tawnya and I stayed back with the broken-down van, a woman named Sarah from Willapa Valley, also pulled over to check in on us, having noticed our school's name on the van. She offered a ride and food, and even once we all separately made it to the Dome, she sought our team out, inquired about the van, and wouldn't leave till she was sure there was nothing more she could do to help. Later, during our first game, we heard a roaring of cheers coming from opposite our crowd. The girls looked over and saw Raymond's team rooting us on. It gave us an unbelievable boost, and from my knowledge for the first time in this division, our girls won in the first round at state. In addition, during a hard-fought loss against Oakesdale, the state champions, we looked up in our stands and saw Mossyrock's team, who were our league rivals, standing in front of our crowd, insistently encouraging and motivating us while we played. In return, our girls found Raymond and rooted for them. And immediately after winning fifth place, they also rushed over to the championship, in total support of Mossyrock.

"While I am proud of the way our Lady Comets played at state, what I value more is the way they carried themselves all year, while getting there. These girls have received countless compliments from other teams, not only on their skills but also about their encouraging attitudes, respectfulness, and sportsmanship. And for them, in the long run, it's turned rivals into allies. And it gave them a literal ride to state. Way to go, Lady Comets! And a big shout out to Raymond's volleyball team, coach and athletic director, Sarah from Willapa Valley and Mossyrock's second place team!"

For your School Calendar: December 17, early release for students at 12:30; Winter Break will be Dec 18-Jan 2; School will resume on Jan. 3.