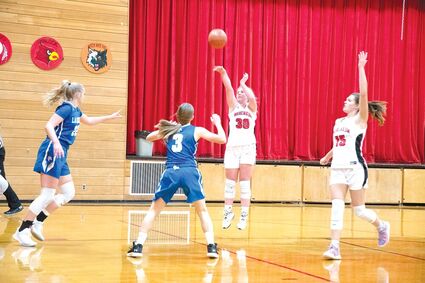 The Wahkiakum Mules girls basketball team is off to a running start with two wins and a loss this week.

The Lady Mules traveled to Hockinson last Thursday and lost a close game 40-37.

"I thought we played a really solid game for three and a half quarters," Coach Rob Garrett said. "It was a great learning opportunity for us as Hockinson played physical pressure defense. As always, we returned the favor and finished our defensive possessions with a solid rebound.

"Offensively we got a little stagnant off the ball and didn't trust ourselves with the ball enough. Hockinson hit some big shots down the stretch to take their first lead late in the fourth. Our girls didn't give up, though, and made a solid comeback. Unfortunately, we ran out of time."

"The girls played well together, and our defense was awesome," Coach Garrett said. "Emerald [Niemela] kicked things off early showing off her three point range. Miya [Kerstetter] was feeling it and played with a little extra fire getting to the basket at will. [It was a] solid game against a team we could see in post season play.

Kerstetter had 20 points; Niemela had 15 points and 15 rebounds, Niemeyer had 11 points, Leitz eight, and Carlson four.

On Monday, the Lady Mules hosted LaCenter and came away with another win 55-32.

"Tonight's game was one to be proud of," Coach Garrett said. "We didn't shoot particularly well and still played smothering defense. The team rebounded extremely well together which was nice to see. Offensively, when the shots weren't falling, the girls were able to adjust and take it to the rim hard.

"Reigha [Niemeyer] in particular stood out tonight. She was simply playing at a different speed than everyone else. She has always been able to get to the rim, but now she's doing it with control and finesse. Once we learn to slash and give her a back side cutter, our offense will really open up.

"Great early season game. This team is improving a little each day and it's already been a really fun season."

The Lady Mules traveled to Stevenson on Wednesday, but the score was unavailable at press time. They host Napavine on Saturday and Adna next Wednesday.