Commissioners of Port 2 may alter boundaries 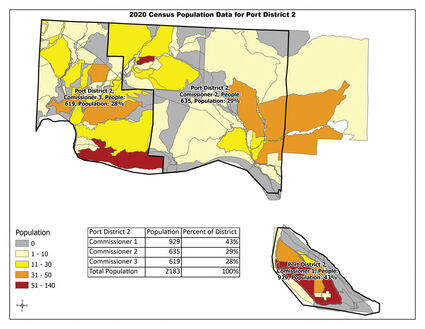 Commissioners of Port District 2 may alter their commissioner district boundaries when they meet in January.

Local governmental entities have been considering changing their boundaries based on population shifts shown in the 2020 US Census. The principle is to have districts with nearly even population numbers so that each person's vote carries the same weight. Commissioners of Port District 1 have voted to change their district boundaries (see story in Dec. 16 edition of The Eagle). Governing boards of Wahkiakum PUD and Wahkiakum County have looked at the issue and declined to change boundaries after deciding that their population shifts weren't significant enough to warrant changes.

At their Dec. 21 meeting, Port 2 Commissioners Brian O'Connor and Austin Burkhalter said they would consider shifting the boundary between Commissioner Districts 2 and 3.

Currently, District 2 includes much of the Skamokawa area and the eastern portion of the Grays River Valley, with the boundary line approximately one mile west of Grays River on SR 4. This boundary, O'Connor said, has existed many years and was created to have three districts with similar populations.

Port 2 Attorney Tim Hanigan had prepared an analysis of district populations for the port commission, and he said the population numbers in the three districts were close enough to require no alterations, even though they are unequal.

At the Dec. 21 meeting, O'Connor and Burkhalter commented on the split in the Grays River Valley. Potentially, there could be two commissioners living on the west side of KM Mountain and none in the Skamokawa area, they said.

Hanigan said the law allows the commission to make a finding that commissioner districts would be better served by defining them by geographical boundaries, in this case KM Mountain.

"I'm for moving it," Burkhalter commented. "You wouldn't have the possibility of two commissioners from the Westend."

Hanigan said he would draft new boundary descriptions and prepare necessary resolutions for board action at their Jan. 18 meeting.