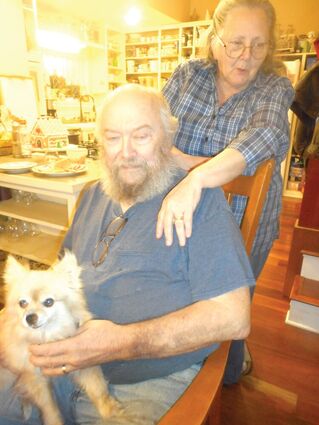 She was born February 13, 1944 in Berkeley, CA, to Wiljo and Helen Kandoll. She graduated Valedictorian from Naselle High in 1962. Darlene Bjornsgaard has the full obituary, so contact her for the full document at (360) 484-3337.

Herb Matta: While looking through my computer where I have many of the interviews Carlton Appelo did with some of the older Finns, I came across one with Herb Matta, known to many in the Naselle area. He was interviewed by Merle Reinikka in 1997. Merle was excellent at interviewing. I thought I’d share a sample of the interview here from Herb with his thoughts about Finns: “I’d like to speak about Finns. Most people think that we’re very difficult to get along with and hard-headed and stubborn and all we have is Sisu. And they label Sisu as being something stubborn. It isn’t really something stubborn. Yes, we have Sisu, but it means a lot of fortitude. It’s when we set out to do something we usually see that it gets done. And we also try to see that if we can’t do it ourselves, we get some help. And we find people who know how and show us how.

Regarding the Finns coming over here – the one big reason was to get new jobs and to help one another. And I think this is a very important feature because I know when I was a kid we had people around us, all of us, one family after another would help each other build homes and there would be somebody there who knew how to make a chimney and stuff like that. And they’d do that, and a good carpenter or axmen who would cut out planks and stuff for making homes. And again, they did it to help one another. They never charged people for any of it. And this would just go on and on and on. Various and sundry things. You didn’t even have to ask somebody to come and help you. People would just kind of volunteer to do it. And I think this is an area that, well, during this last election, there was talk about starvation. You know, there wouldn’t be so many starving people in the world if we got out and helped them and if they’d help themselves a little bit more. ‘Cause we didn’t have any of that going on when I was growing up. There was nobody starving to death. They could always go out someplace and get a job and get a little farm and raise some vegetables and have their own cows and stuff and if you have this kind of an attitude where everybody works to help themselves and to help other people, what a wonderful thing it would be. It’s so easy to just sit around and do nothing and it seems that there’s too many of the young folks these days that seem to think nothing else but to do nothing. That somebody else will help them. Well, I don’t know if that day will ever come, but I wish it would. And to help one another make a world for themselves is just a great thing to do.”

If you’d like to have the complete interview, send me an email (kbertroch@wwest.net) and I’ll send the file to you. Remember that the Appelo Archives Center has many, many interviews on paper. Also, the actual interviews are on CDs now so you can listen to them at the Archives. Check with them to see if there are interviews available with some of your own family who lived here. Call 360-484-7103 and ask about the interviews.

Photo of the Week: For Christmas dinner, I was invited to join Steve and Linda Ramsey who live on the old David White property on SR 4 in Grays River. They renovated the old shop into a lovely home and have plans for the old White home that will be a workshop for both of them. The Ramseys bought the property around 2003 but waited a couple years before moving here while they finished their jobs and retired. At that point they moved here from Vancouver. They have always worked as a team in various areas, mostly for power plants. For example, they spent many years with the Corps of Engineers at the Bonneville plant. Before retirement, they lived in a travel trailer, moving from job to job. They are kind people, thoughtful and encouraging. They have been involved in the community from the beginning but spent most of their time building their home built from the old shop. They are both excellent cooks! They enjoy meeting friends at the Duck Inn where they have dinner at least once a week. They love living out of the city where it’s quiet and peaceful. These are good people to have living here.

Calendar: One new activity is Community Breakfasts including biscuits and gravy, and coffee at the Skamokawa Grange at 18 Fairgrounds Road in Skamokawa. Bring your own mug and a treat to share. Breakfast gatherings will be on Thursday mornings in January from 10 a.m. to noon. Sponsored by SpeakUpWahkiakum @ gmail.com.

January 8: 4-H 2022 Kickoff at Johnson Park in Rosburg across from the Grays River store. It’s for ages 5 and up. Activities include crafts, baking and robotics projects. No charge for the day and need not be in 4-H to participate. RSVP requested to: lfrink@wsu.edu.

January 10: A standing aerobics class is being offered at Johnson Park starting January 10 at 6 p.m. It’s scheduled for Mondays, Wednesdays and Fridays. It is intended more for seniors, but all are welcome. The class lasts for 30 to 40 minutes and it’s free of charge.

Word for the Week: Imagination